I’m a Canadian writer, living in Britain for more than a quarter of a century now. I write historical

fiction, often with an Irish connection, and cozy mysteries set in my native land. My historical series is The Yankee Years, a series of novels and Short Reads set in Northern Ireland during the Second World War. After the Allied troops arrived, life there would never be the same. In these books I tell thrilling and romantic tales of the people and the era. Century Cottage Cozy Mysteries is my cozy mystery series, set in rural Canada a little more than a generation ago. These stories intertwine intriguing mysteries with characters who will warm your heart.

I’ve also released a collection of my short stories, Dancing Shadows, Tramping Hooves and an historical novel set in 1940s/50s Ireland, Hitler and Mars Bars, as well as collections of some of my magazine articles, Fermanagh Gems, and Irish Sanctuaries. 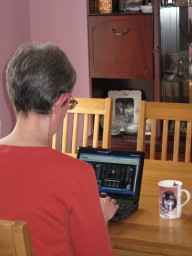 I occasionally write non-fiction, mostly history, arts/music and human interest pieces. I’ve been published in Canadian and Irish newspapers and magazines including the Toronto Star, Mississauga News, Derry Journal, Senior Times magazine and Ireland’s Own magazine. In 2013 I released ebook collections of some of my articles, Fermanagh Gems, and Irish Sanctuaries.

I live on a small farm, in the western region of Northern Ireland, with my husband and an assortment of strong-willed animals. When I’m not writing, I enjoy walks in the country, evenings in front of our open fireplace and folk and traditional music. For many years I played the Scottish bagpipes but I haven’t played since we moved to the farm. That’s probably just as well as it’s rather disconcerting to turn around when you are practicing in a field and find that you have a herd of cows for an audience.

If you have any questions or comments, please email me at:

To hear about my latest releases and occasional special offers, please sign up to receive my newsletter: CLICK HERE.

I only contact readers when I have something interesting to tell you and I never share readers’ email addresses with anyone.