It’s two years today since my historical fiction, Hitler and Mars Bars, was released. I spent the first year after its release making it known to bookshops and libraries throughout Ireland as well as online to individuals around the world. I was delighted with how it was received.

Here were some of the comments:

“It’s a riveting story…As a novel it is extraordinarily well researched. It could form the basis of a revealing film script…Beautifully written with a strong human story running through it…” Brian D’Arcy, BBC broadcaster, Sunday World columnist, journalist 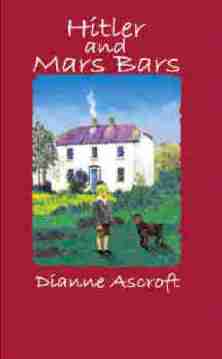 “This novel does an excellent job of showing how the devastation of war continues long after the guns have been silenced…This book attempts to help us better understand the plight of one boy as he struggles with war and its aftermath.” Historical Novel Society Online Review, November 2008

“Ascroft, through her sensitive research, has produced an insightful novel which acknowledges the past, but also the strain of change that was present at the time…[She] has localised the global context of her subject matter, in this unique window into 1940s Ireland.” East Cork Journal, 5th June 2008

As comments came in I was surprised to hear that some readers were suggesting the book to their teenagers too. I had written it with an adult audience in mind. It hadn’t occurred to me that it might also appeal to a younger audience. But this seems to be the age of the crossover novel. There are young adult novels that appeal to adults and also adult novels that can be enjoyed by teenagers too.

This is especially true in the fantasy and science fiction genre. Who isn’t familiar with the all-encompassing popularity of J K Rowling’s Harry Potter series and Philip Pullman’s Dark Materials trilogy? Books such as Judy Fong Bates’ Midnight at the Dragon Café and Mark Haddon’s The Curious Incident of the Dog in the Night-time explore the experiences of a young person trying to understand the adult world and also cross over well.

Books set in an earlier time, with a strong sense of place, such as Coram Boy by Jamila Gavin, The Boy In The Striped Pajamas by John Boyne and the Green Gables series by L M Montgomery appeal to a mixed audience too.

In these examples, strong story telling and memorable characters are central to each book’s appeal. They sometimes portray the darker side of life but younger readers can tackle realistic descriptions of difficult topics when courageous protagonists give them hope that good will prevail.

As I consider these titles, I see what Hitler and Mars Bars has in common with them. Re-creating a vanished era, the novel tells the story of a brave boy who grapples with an often hostile adult world to overcome the problems that life throws at him. It’s the sort of book that allows adults to reflect on an Ireland that’s now gone and younger readers to experience an Ireland they never knew. I guess that’s why it’s found a second audience during its second year.