A Closer Look At The Devil To Pay

Today I’m continuing my interview with Hugh Fitzgerald Ryan, author of The Devil To Pay. As I said yesterday, I was intrigued by the historic events the novel is based on and wanted to know more about them but it was the novel itself  that first captivated me. Even if the plot weren’t based on a true story, it would still be a gripping tale. And the characters are fleshed out into believable individuals who act according to the values of the period; their words and actions bring them vividly to life.

Robin, Artisson, particularly will linger in my mind. He grows from a mute child running wild in the Irish countryside to an intelligent skilled craftsman who, in a very clever way, avenges his foster sister, Petronilla’s death. Mr Ryan’s portrayal of this character makes him spring off the page for me.

So, let’s continue with a few questions about the novel.

Mr Ryan, what prompted you to write about this particular historic event?

HFR: I lived in Kilkenny in the 1960’s and every day on my way to and from work, I passed

the dilapidated house of Alice Kyteler. I knew very little about her story but as I learned more, I became intrigued. People in Kilkenny were quite matter of fact about her: “Oh yes. Alice the witch.” Her house was restored and became once again Kyteler’s Inn.

I was friendly with one of the vergers in the cathedral who gave me the freedom to explore the entire building.  This is not permitted 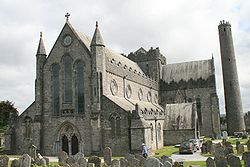 nowadays due to Health and Safety regulations. Fortunately I missed all that and was able to enjoy spectacular views and sense the atmosphere of this splendid and historic building.

My imagination centred on the tension between Alice and the bishop. I did not realise for a long time that the bishop’s tomb with his effigy is still there in the sanctuary. Realisation of this made the story more immediate.  None the less it took me 45 years and five other novels, to put pen to paper concerning Alice and Petronilla, having tried and discarded numerous ideas for the book.  I finally settled on a story concerning a witch trial in which there would be no magic or supernatural occurrences; precious little sword-play; no sacrifice of virgins or drinking of blood or any of the usual paraphernalia of mediaeval witch novels.

I wanted to bring out the sense of hysteria and fear that can impel people to inflict unthinkable cruelty on others.  This of course, is not confined to mediaeval times.  The twentieth century is sometimes compared to the fourteenth, in terms of destructive war and fanaticism gone wild.

I wanted also a human story about the reaction of strong characters to one another.  There is a love story in there too but you have to look closely.

The story centres on a grim incident; cruelty and suffering abound in this tale. Was it difficult or depressing to write about it?

HFR: Much of the background to the story is grim.  It is difficult for a modern person to understand how in an age before The Enlightenment, before Science, before Democracy, the life of the individual was of so little account. It is consistently difficult also to grasp how the message of Christ was distorted into a system of rigid control and barbaric punishment, overseen by those who purported to speak for Him.

And yet there was magnificence in aspects of that world, the soaring cathedrals, the devotion of simple and devout people, the scribes of illuminated manuscripts; the panoply of feudal society. People loved and laughed in their daily lives, not always contemplating the brevity or harshness of life in general. They looked beyond this life and hoped for salvation.

I felt it necessary to look directly at the cruelties meted out in the name of God, without describing these in clinical detail.  Much of the torture is left to the reader’s imagination.  I could not say that it was depressing to write.  Petronilla has been mocked by some writers down through the centuries because she broke under torture. Even at a remove of seven centuries I felt it appropriate to try to tell her story sympathetically.

HFR: I was blessed in the combination of historical events during the time covered by this story. Alice’s life spanned the period of the Scottish wars of Edward the First and Edward the Second; the end of the Crusades and the destruction of the Templars; the invasion of Ireland by Edward Bruce; Friar John Clyn’s annals; the exile of the Pope in Avignon; the murder of Edward the Second; the building of Salisbury Cathedral; the Black Death.

Parallel to all this, local events in Kikenny such as the collapse of the cathedral tower, the great flood, the good and the bad harvests, the trials of Alice and her associates provided a focus against the background of the wider world events.

The historical records provided materials that in themselves read like a thriller.  My concern was not to include everything but rather to select judiciously so as not to browbeat the reader with an avalanche of authentic facts.

HFR: The facts as used by me are pretty well authentic.  I used them as a sculptor might use an armature when working in clay.  It was of course, necessary to devise characters and personalities consistent with the known facts. For example, Alice had four husbands.  They could not have been written as ciphers or as identical clones.  They were variously husbands of a young and of a middle-aged woman.  It was hardly necessary to devise anything concerning the bishop. He was in the out-worn phrase, a “larger than life personality.” His poems illuminate much of his thinking.

Research—a lifetime of reading and observing. Anything to do with the Normans.  There is a contemporary account of the events in Kilkenny, written in Latin and published in 1847 by The Camden Society. (500 years looking for a publisher!  I required only 45.) I knew enough Latin to tackle it with the aid of a good dictionary. It is a vivid and gripping account of the times.

It is essential to ‘walk the land.’  There is an atmosphere in old ruins, old earthworks, old stone and of course, folk tales and traditions, that stimulates the imagination. Sometimes you get a sense of the proximity of historical events.

You use a mixture of historic figures and invented characters in the novel. Which is more difficult to write? Which do you prefer to write and why?

HFR: The major figures are historical.  It was necessary at times to flesh them out, yet

keeping them consistent with the actual events.  The time-scale is accurate. Exploring the motives of the real characters was interesting and at times, demanding.  They had to act in character, which they appear to have done. Robin, Artisson, was an amalgam of fact and fiction even in his own time.

Some of the minor figures are fictional, the guards, the reeve’s clerk, the page, Wat, Petronilla’s parents, the bishop’s secretary, the bibulous canon, Godfrey, the lay-brother, Fergal, Felim Bacach and his brother. They were generally a joy to write.  They nudge the story on and shed light on events, helping to show the context.

It was important that nobody should appear to be there to pad out the novel.  Everything said or done should urge the story onward or tie things to the context.

The characters, real or fictional make a tangible contribution to the narrative.  They have to earn their keep.

On balance however, I wrote instinctively.  My drawings are not illustrations of the story.  They are intended only to suggest a mood.

Thank you for answering my questions so fully, Mr Ryan. You’ve satisfied my curiousity to know more about the story behind The Devil To Pay. Because of its subject, I’m tempted to say that I was spellbound by this novel but I’ll refrain and say that I found it a riveting read and I really enjoyed it. I can easily recommend it to anyone who enjoys a good historical fiction.

To find out more about The Devil To Pay, visit Mr Ryan’s website.

About the author: Hugh Fitzgerald Ryan comes from Skerries, in North County Dublin where he now lives. A writer, teacher, painter and swimmer, he has published five critically acclaimed novels: The Kybe (1983), Reprisal (1989), On Borrowed Ground (1993), Ancestral Voices (1995) and In The Shadow of The Ombú Tree (2005). Hugh is married to Margaret. They have eight children and 6 grandchildren.