Monkey On The Wing: Steve Adams Shares His Life

My guest today is Steve Adams, an Aussie larrikin, who led an action packed life until an accident left him severely injured and blind. He’s joining me to answer a few questions about his life and his autobiography, Monkey On The Wing.

Welcome Steve. First of all what’s an Australian larrikin?

A larrikin is a word usually used in an affectionate way, to describe a bloke who has little respect for authority, societal norms and even themselves. What some might jokingly call a rapscallion.

Tell us about your book.

This autobiography is inspirational on many levels, funny and thought provoking, and takes the reader on a journey, most can only dream about. It’s been described as beautifully written and has been broken up into 107 short chapters, each one standing  alone, but melding seamlessly with the ones before and after. Monkey On The Wing is guaranteed to arouse every emotion in the reader and the story has an extremely dramatic twist that shows how, almost any level of adversity can be overcome. The book comes highly recommended and has the rare quality of covering three genres – travel, biography of an Aussie larrikin and inspiration.

What prompted you to write about your experiences?

After losing my sight in a horrific accident 14 years ago, I reflected from my hospital bed how I wanted my future children, one day, to know there is a lot more to their dad, than someone with a disability that has caused him to lose his independence. Throughout the 18 months of my recovery and rehabilitation, the desire became stronger and the idea of writing Monkey On The Wing was born.

Is this the first book you’ve written? Was it difficult to write about your life?

Monkey On The Wing is my first book. My story wasn’t hard to write, once I got started, as it was in my head for a long time. However the difficulty was how to get it from my head and onto paper. It wasn’t until my friend and future editor, Meg Lane, gave me some good advice on how to get started, that I was able to open the ink vein and during the next two years, the book virtually wrote itself.

Probably the biggest hurdles to overcome were of course, being blind, the fact that I only have the use of my middle right finger to type, and that I had never used a computer or typewriter before. In order to write my book, I had to spend 1 year at the Western Australian Blind Association, learning the functions of a computer.

In writing a true story there are some people who are going to be hurt and although not my aim, it is a story about my life and I had to show what shaped me. I must take this opportunity to thank those people, for it was they who provided me with the fortitude that I needed when the time came. 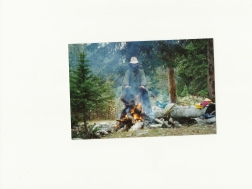 Steve in the Canadian Rockies

Through my life experience I have learned that if you want something, you must make it happen and since my accident I have lived by that. My life is as full as it’s ever been, has taken on new direction and never stops moving forward.

Please tell us anything else that you wish to about your book and your life.

Monkey On The Wing is far more than just a story. It is a journey through childhood and teen years where it speaks of, not so much taboo subjects, but the life experiences, some very negative, that many of us go through and tend to ignore because of embarrassment or denial. The reader is then taken on a journey all over Australia and the world, that will show how truth really is stranger than fiction. Unlike most inspirational books, this one shows with great honesty, ways in which a person can reach for the stars and instead of being left with just the promise of great things, can actually realize their dreams.

Throughout the book and my life, my philosophy of moving forward, and not wasting time on regrets or looking back is apparent. Living that way I have been able to see opportunities more clearly, as they present themselves and life has remained adventurous.

Thanks for answering my questions, Steve. Readers now know a little bit about you and your life. So let’s give them a taste of Monkey On The Wing:

I had no schedule when I left Alice Springs, so when I came across the turnoff that led to Ayres Rock, I decided I’d go and have a look. As I stood on a road in the middle of Australia I marvelled at the harsh, dry beauty of the place and considered how easy it would be for those early explorers to go missing.

I imagined a lost man out there and felt great pity for him, for although the country was soft in its beauty, its arid harshness would show no mercy to a man dying of thirst.

Not too long after, I saw a green panel van that was heading north and I was very happy to see it pull over. I made my way to the passenger side window where I was surprised to find a Japanese fella gesturing for me to put my gear into the back of his van, so I stowed it and joined him in the front.

The first thing he did, was offer me a cold can of beer from a large esky sitting beside him on the bench seat. He didn’t drive off straight away and as we introduced ourselves, I realised with a smile that he could hardly speak English. However, I understood his name was Egar. Once the formalities were over we took off for Ayres Rock.

As Egar and I hurtled along in the centre of Australia, with Simon and Garfunkle cranked up on the stereo and the beer flowing freely, I quickly realised my new friend was drunk. Although I was enjoying myself, I was tired from my night in Alice Springs so I gestured to Egar that I wanted to have a sleep in the back. He looked a bit disappointed that I was piking out on him but he pulled over anyway and I got into the back of the van and fell straight to sleep.

A bit later, Egar woke me up shaking my leg saying, “Big rock, big rock,” so I got up. What I saw when I got out of the van blew me away. We were still about seventy or more clicks from The Rock, but from that distance its sheer size could be put into perspective. Although I’d seen pictures of it, I could never have imagined it in reality. It was massive and its colours of red brown and ochre were amazing.  Click to continue reading.

Monkey On The Wing by Steven Adams is available as a hard copy through his website or as an e book through Smashwords.