Bird Of Passage: A Portal Into The Recent Past

I’m very fond of books set in Ireland or Scotland, especially in the recent past so when I read, Bird of Passage, it was exactly my type of book. I found the two main characters, Finn and Kirsty, believable and I got caught up in their lives. It’s a moving novel and I think it’s evocative of the era it’s set in. I was so impressed with it that I invited Catherine Czerkawska, the author, to visit Ascroft, eh? to tell me a bit more about the book. Welcome Catherine. 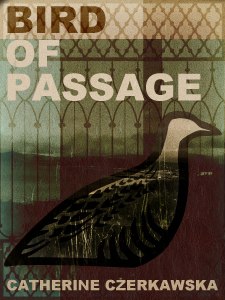 CC: It’s called Bird of Passage. It is set in Scotland and Ireland and it spans the years from the 1950s to the present day, although I wouldn’t call it a family saga. I think the difficulty of placing it within a particular genre – Historical? Saga? Contemporary? Romance? –  was what gave me so many problems with traditional publishing. It’s not a romance, but it is a love story with a 20th century historical setting. And it’s about how childhood trauma can blight a life and the lives of others. It explores events which took place during the childhood of both main characters, so I suppose it is historical – although I remember the sixties quite well!

CC: It isn’t so much about a single event, as about a milieu, and a set of circumstances. When we first moved to Scotland, back in the sixties, when I was quite young, I remember being intrigued by the ‘tattie howkers’ who still came over from Ireland to help with the potato harvest, as they had every year for generations. By the time I was living in Scotland, the conditions in which they were housed were being regulated and improved but they still seemed to be maligned visiting workers. There was a lot of prejudice, as there still is with regard to migrant workers today.  They would be blamed for everything from petty theft to breach of the peace. At the same time, I had been reading about the industrial schools of Ireland, and the appalling treatment of some children. The two things collided in my head and the resulting story is Bird of Passage.

CC: If I’m writing a historical novel – and I’ve written several – I always like the historical background to be as accurate as possible.  Glaring inaccuracies and anachronisms bother me as a reader and I do try to avoid them as a writer although I’m quite happy to ‘stretch’ the truth a bit. When you’re writing fiction, I think you have to do your research, but then give yourself permission to fictionalise things. Bernard MacLaverty calls all fiction ‘made up truth’ and I think this applies to historical fiction as well – very much so. I suppose I’m trying to recreate a time and place for my readers. With the historical sections of my previous novel, The Curiosity Cabinet, I did a lot of research but wasn’t afraid to include things that might seem anachronistic, but weren’t. I knew a lot about this period. When it’s more recent history, like Bird of Passage, I used some of my own knowledge of the time and place and researched the rest.

CC: I read extensively about the tattie howkers, (the potato diggers): newspaper accounts and research papers as well as Patrick Macgill’s wonderful Children of the Dead End, which I was already familiar with. I also read a number of harrowing accounts of children who had been placed in Irish Industrial schools including Mary Raftery and Eoin O’Sullivan’s Suffer The Little Children.

Do you use a mixture of historic figures and invented characters in the novel. Which is more difficult to write?

Dunshee, an important place in the novel

CC: I almost always invent, although oddly enough, the central character in my next book is a real person. But I’ve invented a whole new life story for him, because details about him were very thin on the ground. I read a brief account of some key events in his life and it seemed to me as though something else was going on, so I wrote about it. This is quite a departure for me. But I have a couple more projects planned and they involve real historical characters too, so I’ll know how difficult it proves to be in the next year or so. In Bird of Passage, both Finn and Kirsty are invented, although any devotee of Wuthering Heights (which I am) will probably realise that there is a homage to WH going on there. Not a retelling, or anything so precise – but references to that book.

Which to you prefer to write and why?

CC: I honestly don’t think it will make any difference. I think the pressure with writing about a major historical character would be greater though: so many experts prepared to tell you that you’ve ‘got it wrong’! I’ve written historical non-fiction, as well as fiction and of course you approach that quite differently. With fiction, so long as you avoid howlers, I think you must allow yourself a certain freedom to invent, even when you’re writing about real people. It is fiction, after all.

CC: In Bird of Passage, I drew largely upon my own experience of small Scottish islands and how those societies function, and of Dublin, and – of course – my own Roman Catholic background. I worked in Dublin one summer, back in the early 70s and had very vivid memories of what it was like back then. My mother’s family were Irish people who had come over to Leeds, and I had a background of knowledge there too. I think the trick is to research, then write. In writing, you find out what you don’t know, and can go back and find out about it. In many ways, I write to ‘find out.’ There is an event in Finn’s childhood which colours everything – I can’t say what it is, because we don’t find it out until the very end of the novel, and Finn himself has blotted it out of his mind. I spent months not knowing what it was either. It was as though I too had to find it out, had to ‘remember it’ along with Finn. I woke up in the middle of the night, thinking ‘that’s it. That’s what happened!’ But I could no more have ‘made’ that happen than fly in the air.

There often seems to be more scope in historical novels for male characters than female characters. Do you prefer to write one sex or the other. And, if so, why?

CC: I suppose it depends upon the period. I don’t think I have any preference, quite honestly. In Bird of Passage, I cared as much about Kirsty as I did about Finn. But I’d say that – as a woman – I still like to try to get inside the heads of my male characters and see what makes them tick. My work in progress is essentially a novel about male friendship verging on love (and betrayal too) so the two main characters are both men. But I have a couple of ideas for future work which both involve historical women. I don’t really think I have a preference. The ideas present themselves and I write them. I suppose I’m an instinctive writer, and that’s how I like it.

Thanks for answering my questions, Catherine. You’ve given me greater insight into Bird of Passage and also whet my appetite to read your other novels.

Catherine writes in a wide variety of forms: short stories, plays, novels, non-fiction books, essays and articles. She tutors creative writing and she is on the committee of the Society of Authors in Scotland.

Readers can visit Catherine online at her website and her blog.