At the end of August I posted some information about Quest, Inc by Justin Cohen. I had intended to review the novel at the same time but I was juggling too many plates and I hadn’t even finished reading the book yet. But I’ve read it now and I’ve written my review.

In my last post about Quest, Inc I included the publisher’s synopsis. You can read it here. 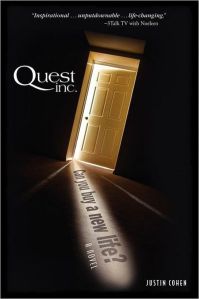 Quest, Inc is an interesting mixture of a novel and a self-help manual. It is an engaging story about five personal development experts who put their reputations and their company on the line to convince an investigative journalist that they really can help people change their lives. From the opening scenes when one of the experts, Robert, has to confront his own problems with overeating and obesity to the last few pages when each of the experts is intensely involved with coaching his or her own clients to help them change their lives, it is a story that pulls the reader along. It starts slowly as all the experts are focussed on the dilemmas of one of the experts and one client before it picks up the pace midway through the book as several new clients are added to the experts’ caseloads, creating several storylines that branch out and run simultaneously. At first I found it unsettling to jump from an in depth look at two characters’ journeys to following several characters’ lives at once. I had got used to the original small cast of characters and didn’t want to accept new characters and subplots into the world inside my head. But the new subplots picked up the pace of the story, increased the tension and hooked me.

Early in the story there are several long passages explaining psychological and counselling theories and techniques. Although the reader needs to understand this information and may not be familiar with it, I found some of the passages read like a university textbook. It is more difficult to do but it would have been more effective to filter the information into the story in smaller chunks so it would not interfere with the flow of the plot.

In the novel the motivational experts work with clients who have a wide range of problems. Some of the issues that are dealt with include homelessness, marital breakdown, suicide, inadequate social skills, fear of success, alcoholism, obesity and health problems. The author obviously has an understanding of how to deal with these problems and he presents sound, useful information about them. I don’t know whether he intended the book as a subtle self-help manual but it has tidbits of information that readers may be able to use in their own lives.

The characters are realistic and the issues they face are presented as multi-faceted problems. The experts don’t have all the answers nor do they solve every problem. They can only be effective if their clients want to change. This insight provides a believable resolution to several subplots within the book.

The author has created six main characters, the motivational experts and the journalist, who each has a unique personality and backstory: they complement and contrast each other. Their individual stories engage the reader and the author also weaves their stories together to form a cohesive whole.

The main conflict revolves around the investigative journalist’s challenge to the experts to transform one client’s life. If they fail the journalist will destroy their reputation in print. As the story progresses more clients enter the story, their lives are explored and this initial conflict sometimes fades into the background but I was gripped by the new stories unfolding so I didn’t mind the original plotline sliding away from centre stage.

When I began the novel I wondered whether it might get bogged down in psychological theories rather than be a good story but as I read I got involved in the book: the characters’ lives, their problems and their successes. It did become a good story for me. The only thing that left me unsettled was its cliffhanger ending. It is the first book in a series so the conclusion is meant to compel the reader to pick up the next book. But I would have liked more ends to be tied up in this book. Several important questions were left unanswered and major subplots unresolved. So, there were too many threads of the story left unresolved for me to feel like it had concluded satisfactorily. That said, I will be waiting to read the sequel (with this reader I guess the author achieved what he set out to do …).

Quest, Inc is a book that makes readers think about life and provides some good coping strategies for its difficulties – oh, and it also entertains. It is a good read.

About Justin Cohen: He is the author of four books and seven audiobooks. He produced and hosted a television talk show in which he interviewed some of the world’s top experts on success. As a leading authority on personal development, with an honours degree in Psychology, he speaks, trains and writes in the fields of motivation, sales, service and leadership. Having spoken professionally for nearly fourteen years, he has presented in twelve different countries, and in virtually every industry, to an average of ten thousand people annually.

2 Responses to The Quest Continues