The Scarlet Ribbon by Derry O’Dowd is the novel which was chosen to launch The History Press Ireland’s fiction line. Last week I featured the author of another one of this publisher’s titles, Annemarie Neary who wrote A Parachute in the Lime Tree.

obstetrics and gynaecology as a branch of medicine. I knew nothing about this subject before I read the novel but I was curious. So I started reading. The details of real obstetric cases that are woven into the story intrigued me and I also empathised with the plight of the widowed protagonist, James Quinn – in other words, I enjoyed the book.

I’ve invited one half of the duo, Derry O’Dowd, to Ascroft, eh? to answer a few questions about the book. Welcome Katy. Let’s get started, shall we?

The Scarlet Ribbon follows James Quinn, a young Irish surgeon battling prejudice, suspicion and personal demons in his controversial quest to change the face of medicine. Following his marriage, tragedy strikes, thrusting James into a life of turmoil and despair. Throwing himself into his work, the young surgeon eventually begins to find solace in the most unexpected of places. From the backstreets of Paris, through the glittering social whirl of London, and finally back to Ireland again, this is a story of the thorns of love and the harsh reality of life in the eighteenth century, where nothing is simple and complications of all kinds surround James Quinn, man midwife.

What prompted you to write about this historical event or era? 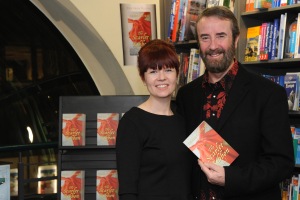 I write under my own name, Katy O’Dowd, but also with my Dad as Derry O’Dowd – The Scarlet Ribbon was his idea. He is an obstetrician gynaecologist and medical historian, and he wanted to write about the birth (pardon the pun) of that branch of medicine.

The historical facts were stuck to fairly rigidly. For example, all of the medical cases in the book are based on real events.

As mentioned above, Dad is a medical historian, and he had already done a huge amount of research for his books The History of Medications for Women and The History of Obstetrics and Gynaecology. I did some supplementary research on things like the clothing, furniture, buildings, and customs of the era along with reading about herbal treatments and household management of the time. We also took a trip to Paris. I was six months pregnant at the time, and still suffering from horrendous morning sickness, so it could have been a bit more idyllic to say the least, but I’m very glad we went as I think it really helped when writing the scenes set in Paris.

Do you use a mixture of historic figures and invented characters in the novel. Which is more difficult to write? Which do you prefer to write and why?

I think it is probably more difficult to write about historic figures. Although they had been researched thoroughly, it was daunting to put words into their mouths.

The research trip to Paris, using pictures – for example the outfits and furniture at the V&A Museum (had a visit there too to see things in ‘real life’) and listening to music from the era really helped.

I used to prefer writing male characters, but now like writing female characters just as much – if they step outside the bounds of their traditional roles of home-makes and child-bearers they quickly become extraordinary, which is great fun.

Was it difficult to write with another person and how did you split the work?

I didn’t find it difficult. Dad came to me with the idea and asked me to write it. He worked out a plot and we sat and went through chapter by chapter, adding to things, talking about the characters in-depth. And of course he had to explain the medical scenes to me. I went away and wrote a couple of chapters at a time and then we reviewed them. We are collaborating again now, on the follow-up to The Scarlet Ribbon.

Thank you, Katy, for telling us a bit more about the book – the story and the research that went into creating it. Readers can learn more about The Scarlet Ribbon on Derry O’Dowd’s website. Katy can be contacted through her website and her Facebook page as well as on Twitter (@katyod).