Writer Jessica Knauss is hosting an historical blog hop today and I’ve signed up to link into the chain. My mission is to post ten sentences from my historical fiction writing as part of the blog hop. 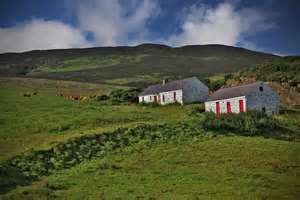 Recently I’ve been thinking about the story of the Coonian Ghost House near where I live in Co Fermanagh, Northern Ireland. The centenary of the first reports of unnatural happenings at the cottage is next month so maybe that’s what prompted me to post the passage I’ve chosen.

I’ve taken my ten sentences from The Empty Cottage, a short story I’m working on. It’s set on a farm in Co Fermanagh, Northern Ireland c.1910. A young lad, Johnny, goes with his two uncles, Dermot and Michael Reilly, and a neighbor, Tom McNulty, to investigate lights they notice flickering in an empty cottage on the Reillys’ farm. An elderly man, Willie Donegan, lived in the cottage until his recent death. The group crowds behind Dermot as he leads them up the path and opens the cottage door:

We stumbled into the room and looked around. The fire was burning in the grate and the candles glowing in the windows. There was no sign of anyone else there. I’m sure I heard a collective sigh of relief from the three men in front of me.

“It looks just as if oul’ Willie was still here,” Tom said. Everyone muttered uneasy agreement.

“Sure, it’s not Willie. There’s no such thing as ghosts,” Dermot said.

“Well, who did this then?” Michael asked.

I hope you enjoyed this peek into The Empty Cottage. The story isn’t finished yet but, if you like eery stories, I included another one, Conquering the Shadows, in my short story collection, Dancing Shadows, Tramping Hooves.

Now that you have stepped back in time with me why not check out the other blogs taking part in the historical fiction blog hop? You’ll find links to them on Jessica Knauss’ blog.