It Was A Pleasure To Meet Martha’s Girls

It’s no secret that I enjoy reading historical fiction. I don’t limit myself to any particular era but wartime stories always interest me. Since I moved to Northern Ireland more than two decades ago I’ve developed an interest in stories set here. I haven’t found many wartime novels set in the province though so I was pleased recently to learn about Martha’s Girls by Alrene Hughes. The storyline intrigued me and I was keen to read it. I can honestly say that I wasn’t disappointed when I reached the last page. It’s an exciting and heartwarming story – anyone who knows me, knows that’s exactly my type of book. So I enjoyed Martha’s Girls immensely.

I’ve invited Alrene to join me on Ascroft, eh? to answer a few questions about the book. Welcome Alrene. Let’s get started, shall we? 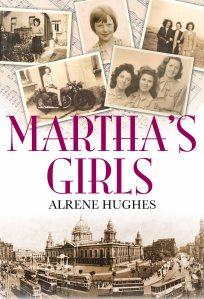 AH: Martha’s Girls is a family saga set in Belfast during WWII. It follows the lives of Martha and her four daughters during this historic period, portraying their everyday lives and showing dramatic events such as the Blitz through their eyes. The girls are talented singers in the style of the Andrews Sisters and join an entertainment troupe led by Goldstein, a Polish Jew, to raise morale and funds for the war effort. But Martha is torn between allowing her girls the freedom to perform and her desire to keep them safe from their own headstrong personalities. The rise in their popularity is set against life in wartime Belfast: from elegant Royal Avenue; into the mills and aircraft factory; concert and dance halls; to the heart of the Stormont government.  The city is unprepared and vulnerable, its people unaware of the horror about to befall them, and Martha’s family will need all their strength and courage to survive.

AH: I’ve always been interested in World War II, especially the lives of women on the Home Front. I love the popular culture of the time – music, cinema, fashion. Maybe some of this comes from my mother and aunts who were, quite literally, Martha’s girls. The novel is loosely based on them and their singing career as The Golden Sisters. I was given a scrap book many years ago full of concert programmes and photographs of them and, of course, there were snatches of stories I heard as a child about life in wartime Belfast.

How closely did you stick to the historical facts?

AH: The historical events are accurate but what I tried to do was to show them through the perspective of this Belfast family. They listen to the declaration of war on the radio, but have no way of knowing what it means. The tragedy of Dunkirk touches their lives and they mourn for a friend. They slowly become aware of the vulnerability of the city and, of course, they experience the full force of the blitz. It was interesting to come across less well known incidents, such as the sinking of the Liverpool-Belfast mail boat, and to ask ‘What if a character was on that boat?’

What research did you do for the book?

AH: I read books about Belfast in the war years; most notably Brian Barton’s very thorough account of that time in which he dealt with not only the historical events but the social and political life in the city. The eye witness accounts of the bombings were also very useful. I visited the wonderful Linen Hall Library in Belfast to read newspaper reports, not only of war events but also local social news and concert and cinema listings and reviews. Because music plays a big part in the lives of Martha’s daughters, I also used the internet a great deal to ensure that the songs they sang had actually been released at the time they were singing them – I was very disappointed to find that ‘Don’t Sit Under the Apple Tree’ wasn’t released until 1942 when I really wanted that to be the girls’ signature tune in 1940!

Did you use a mixture of historical figures and invented characters in the novel? Which is more difficult to write? Which do you prefer to write and why?

AH: My mix was even more complicated. I had members of my family, my grandmother, mother and aunts, who were very easy to recreate on the page. I just had to invent a situation or storyline and I knew how each individual would react. I felt like I was eavesdropping on their conversations, so the dialogue was written very quickly.  There were also many characters created from scratch. I loved writing about Harry Ferguson, who courts Peggy, such a likeable rogue, funny and sexy. Then there were famous historical figures, like Churchill, who made cameo appearances. All in all, I liked the variety of mixing these characters to give the book an authenticity and a range of attitudes in the early years of the war.

AH: In terms of place, I grew up in Belfast in the ‘50s and early ‘60s. It was my city and I knew it well and I think it’s fair to say that at that time it had hardly changed since the end of the war. My mother would sometimes point out a cleared area between buildings and explain it was a bomb site, or she’d tell me about a dance hall where she sang. I also studied lots of old photographs and checked old street maps in case my memory was playing tricks.  Similarly, I can recall in minute detail my grandmother’s house (I expect most people can do the same) which was exactly how it would have been in the war years. Minus the blackout curtains, of course!

People must be seen by the reader and I like to use little details of clothes, hair, make up to convey the style of the period.  Attitudes and social mores need to be finely judged; characters have to respond to situations with 1940s sensibilities and, unlike today, people were more reserved when discussing their feelings and relationships and in a novel that’s a good source of tension and misunderstandings.

There often seems to be more scope in historical novels for male characters rather than female characters. Do you prefer to write one sex or the other, and if so, why?

AH: Martha’s Girls focuses on five feisty women at a time when young women, in particular, sensed a sudden opportunity to shape their own lives. Many worked in the war industries, the girls in the book seized the opportunity to join a troupe of entertainers, and the ever present threat of bombing encouraged a ‘live for the moment’ attitude. I also enjoyed writing about Martha, especially her attempts to control her girls. As a mother, I knew the delicate line she had to tread and the unspoken fears that haunted her. So maybe I prefer to write women, but sometimes you just fall in love with a man you’ve created!

Thanks for answering my questions so well, Alrene. You gave us a great overview of the book and your writing but your last comment leaves me wanting to ask you further questions. What happens when you fall in love with a man you’ve created? I’m very curious to know….I understand Martha’s Girls is the first book in a series and you are currently working on the sequel. Don’t forget to let me know when the next one is available!

Readers can learn more about Alrene and Martha’s Girls on her website and the book’s Amazon page.

About Alrene Hughes: She was born in Enniskillen and grew up in Belfast. She is a member of the Manchester Irish Writers and has written poetry and short stories for over twenty years. Martha’s Girls is her first novel.

I'm a Canadian writer and author, living in Britain. My first novel, 'Hitler and Mars Bars' was released in March 2008. More information abo
View all posts by Dianne Ascroft →
This entry was posted in May 2013 and tagged Alrene Hughes, Belfast, historical fiction, Martha's Girls, World War II. Bookmark the permalink.