I’m currently reading Time Fall by Tim Ashby. It’s an exciting mix of military thriller and historical fiction. I really enjoyed the opening chapters set during the Second World War and I felt like I was there as the army unit prepared to parachute into Germany. I’m now being pulled along by the events unfolding in the present day as the German police hunt down suspected terrorists, unaware they are soldiers still fighting a war that ended six decades ago.

This is how the publisher describes the book: “Lt. Art Sutton’s team of six US Rangers parachute into Nazi Germany…but they vanish in 1945.  They land, a few minutes later, in 2011. The Rangers are unaware of the passage of time all around them and the valiant, misguided soldiers begin to attack “enemy” targets.

They face the age old question – What is good? What is evil?”

I’ve invited Tim here today to answer a few questions about the novel. Welcome Tim. Let’s get started, shall we?

When I was a university student a Vietnam veteran classmate told me about an incident that he witnessed that inspired me to write Time Fall.  During that Vietnam War a “dustoff” (US Army unarmed medical evacuation helicopter) mysteriously disappeared after flying into a strange cloud during the monsoon season.  Hundreds of military personnel witnessed the phenomenon, a high-level investigation took place, but no trace of the aircraft or its crew was found.  Perhaps one day that helicopter will land in a very different Vietnam with its unsuspecting crew of young American soldiers.

The novel is factual where actual historical events are depicted.  For example, the opening scene set in Berlin in April 1945 is based on actual newsreels and eyewitness accounts.  Only a few early scenes take place in the 1940s – the rest of the book is set in 2011, with a few “back story” scenes throughout.

I interviewed WW II US, German and British veterans, as well as US Vietnam vets.  I visited every place described in the book, including an interview at the US government agency in Washington DC that deals with the remains of MIAs.  I did copious research on WW II weapons, uniforms, tactics, contemporary culture (music, movies, etc.), and even speech patterns.  I have personal experience of anti-terrorism intelligence and military operations, so I used this background in portraying the “real” terrorists in Time Fall as well as the modern German army’s elite counter-terrorism unit.

For the most part, I used invented characters.  The only historic figure who makes a cameo appearance is Adolph Hitler.  My previous novel, Devil’s Den, used many actual historic figures from the 1920s and 1860s.  I find depictions of historic characters easier because so much factual material is available about their appearance, character, etc.

As noted above, I did extensive research about the 1940s and spoke with people who lived in that era.

As a male, it is easier for me to write about males characters.  However, I enjoy depicting female characters because they are an interesting challenge.  I’m always pleased when readers or reviewers say that they liked my female characters.  For example, one reviewer wrote:  “And then his love interest, Peggy Stewart!  I was actually impressed that a man wrote the love scenes with such controlled passion, yet sexiness and taste.”

Thanks for answering my questions, Tim. The G8 Summit was held in the area where I live this week, amidst very tight security, but nothing I’ve seen at home this week was as exciting or gripping as what I’ve been reading in this novel so far.

Tim is currently on a blog tour and, as part of the tour, there is a contest to win a free copy of Time Fall.

Here’s the details of this tour and contest: “Filled with historically accurate details, Time Fall is a complex military tale that keeps readers riveted through every surprising twist. Read an excerpt and to enter to win a FREE copy of Time Fall, visit http://www.timefallbook.com/. For your copy, visit http://amzn.to/190ZMwe. You can also get your copy at all major book retailers.” 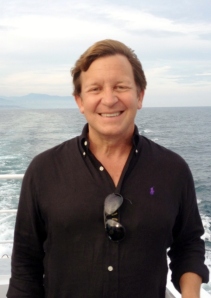 About Tim Ashby: Tim’s life has been as thrilling as one of his action/adventure novels. Visit his author blog at www.timashby.com.

An international lawyer, businessman and writer, Tim Ashby worked in Washington DC as a counter-terrorism consultant to the U.S. State Department, and then as a senior official – the youngest political appointee of his rank – at the U.S. Commerce Department, responsible for commercial relations with Latin America and the Caribbean. He held two Top Secret security clearances and worked with a number of colorful characters, including members of the U.S. military’s Joint Special Operations Command (JSOC). He has lived in the Caribbean and Europe as well as various places in the United States. An avid historian, he published widely on military history, archaeology, business and international relations. A licensed attorney in Florida and the District of Columbia, Tim Ashby has a PhD degree from the University of Southern California, a JD from Seattle University Law School, and an MBA from the University of Edinburgh Scotland.