Leadership: It’s A Marathon Not A Sprint

Posted on February 7, 2014 by Dianne Ascroft

Today I’m doing something a bit different. I’ve ventured away from the realm of fiction and I’ve invited Gordon Tredgold to Ascroft, eh? to talk about his leadership guide, Leadership: It’s a Marathon not a Sprint and what inspired him to write it. I think many writers will be able to use some of what he learned while writing the book for their own writing. 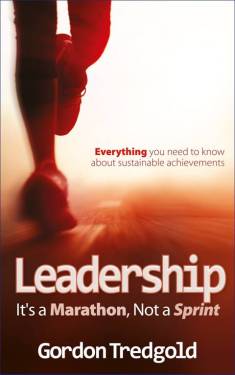 The author describes the book as “a pragmatic Leadership guide, explaining leadership principles in an easy to use, easy to understand and more importantly easy implement style.

The book is split into 26 chapters, one for each mile of the marathon. In each chapter I explain a leadership principle in detail, provide examples of that principle being used in a business context, then each chapter concludes with how that principle was applied to my running goal of running my first Marathon at the age of 52.”

Welcome Gordon. I’ll hand the floor over to you.

GT: I’m often asked what made me start to write and also where does my inspiration come from.

I started to write for several reasons, one of them being the usual desire of writing a book, I think all of us would like to be able to do that, and I am no different.

Throughout my career I have often received very positive feedback on my leadership style, which whilst not unique, is a little bit different, and I thought it would be good for me to write about my approach, and to share my thoughts.

This was also good for me, because one of the best ways to learn is to teach, so by writing about my leadership approach it would make me examine it much more closely, increasing my own understanding and hopefully I would also be able to learn and improve my approach.

I also thought it would be good to write a simple, pragmatic leadership book, one which talked about what to do, and also how to do it, with clear examples showing how and what the benefits or issues can be.

I think there are a lot of leadership book which focus on the why, which is interesting from a theoretical stand point, but they were always very thin on the how.

Obviously this is not true of all leadership books, there are some excellent one’s out there, especially by my favourite author Ken Blanchard. Blanchard’s books tend to be very easy to read, pragmatic with great examples, and often taking the form of a story to get the messages across such as in GungHo! Which is a book I fully recommend.

My initial goal was to write a book, but when I sat down and started I found it very difficult, I didn’t lack ideas for the book, but I did lack a structure. So after a week or so of limited progresses I decided to take a different approach. I decided to write a blog, I would right down my ideas as separate individual posts of between 400-800 words. This would allow me to make a start, make some progress, each post would begin as an idea for a chapter of a book and I would summarize an idea and add some examples.

I did this with a view that after a month or so I would have ideas for 30 chapters that I might then be able to put them together as an outline for a book, which I would then be able to flesh out with more details and examples.

I found the writing to be very therapeutic, and also that I enjoyed it, I looked forward to writing my daily blog. Once the initial ideas were all put down I was concerned that I might struggle to keep up the daily routine, but what I found was that I got inspiration for new posts from many sources, either through what was happening in my job, through sports I was watching or in private life.

I began to see things from a leadership perspective and it helped me continue to identify items I wanted to share. One thing I did try and do was to keep politics out of what I was writing, focusing on leadership, but there were so many things that were happening in the news, such as the Gun Control in the US, Banking Scandals, Euro Crisis etc., etc. I did write posts on these subjects but I tried to keep my personal political views out of the subject and try and write about the leadership aspects with an objective view. It wasn’t always easy, and I wasn’t always 100% successful, especially when writing about the passing of Margaret Thatcher.

As of now I have written over 400 posts, I try and write every day, but I usually end up writing 4-5 per week.

About two or three months after starting the blog I decided to run a marathon to raise money for charity in support of several friends who were going through chemo therapy. As a non-runner who had now taken up a big challenge what I found was that much of what I was doing in preparation and training had so much in common with what I was writing about on Leadership, such as Goal Setting, Motivation, Preparation, planning, etc., that it gave me an idea to combine the two things together.

This is how I came up with the idea of the book, Leadership: It’s a Marathon not a Sprint, I would write a book with 26 chapters, each chapter representing a mile of the marathon. In each chapter I would write about an aspect of leadership, provide details and examples on that aspect, and then I would look to explain how I had used that leadership thought to help me with achieving the marathon.

I really liked this idea, one because it gave me a structure for the book which then allowed me to envision the finished product which motivated me to compete it, and also because it allowed me to use my own struggle to complete the marathon as an example of what leadership can help you achieve. It was like I was my own guinea pig for my leadership ideas and approach.

It also had the added value that it gave the book a story, a narrative, which would help keep the book from becoming a dry book on leadership.

Interestingly the whole writing process was a leadership journey too, it was like a writing marathon that mirrored my running marathon. The process took about 12 months, with 6 months needed to create the second draft of the book and then 6 months for all of the production, artwork, and everything that was associated with taking a finished manuscript and converting it into a book.

This was significantly more work that I had envisioned, or let’s say there was so much more to it than I had known. I would say that I did more work after the book was written than I did before: checking references; editing; reviewing; editing; re-writing parts; editing; rewriting whole chapters; and of course editing.

It was a great learning process and often during that last few months I wasn’t sure whether it would ever be completed and the book produced.

I am very happy to have had to book published, that my thoughts are available for people to share, but I think the biggest benefit to me, is my increased understanding not just of leadership in general, but of my own leadership style in particular. The better I can understand my own leadership, the more control over it I will have which will go a long way to helping me improve it.

Thank you, Gordon, for your insight into your book and the way you wrote it. As well as learning about a leadership style, readers who are also writers can take some tips from it for organizing their own writing too.

About Gordon Tredgold: Gordon is the author of Leadership: It’s a Marathon Not a Sprint. Learn more about him at his website and about his book on its Amazon page.

He has worked in IT for over 20 years and is a specialist in Transformational Leadership, Operational Performance Improvement, Organisational Development, Creating Business Value via IT, and Program and Change Management. He has an excellent Global and International experience having lived and worked in UK, Belgium, Holland, Czech Republic, USA and Germany. He also has multi-sector knowledge including FMCG, Logistics, Utilities, Telecoms, Aviation, Banking and Finance.

I'm a Canadian writer and author, living in Britain. My first novel, 'Hitler and Mars Bars' was released in March 2008. More information abo
View all posts by Dianne Ascroft →
This entry was posted in February 2014 and tagged business books, Gordon Tredgold, leadership books, Leadership: It's A Marathon Not A Sprint, self help books. Bookmark the permalink.

2 Responses to Leadership: It’s A Marathon Not A Sprint