Where Would You Like To Be On St Patrick’s Day?

On St Patrick’s Day many people, especially Irish expats and those who wish they were Irish, think of Ireland. Whether they remember their home place or the location of a memorable holiday, they return to it in their minds.

For St Patrick’s Day I’ve asked a couple Irish authors to tell me about their favourite places in Ireland.

Brownswood, Enniscorthy Co Wexford, the home of Eileen Gray (1878-1896) and the subject of my new book, The Interview which will be released in May by New Island Books. While researching, I retraced her footsteps all over Europe, but access to Brownswood defied me. Letters, emails and telephone calls all went unanswered. Then one autumn afternoon, I just rolled up unannounced. Brownswood stands on the banks of the river Slaney. As I stood in admiration, a man appeared by my side. With no prompting but great enthusiasm, he took a key from his pocket and opened the huge hall door. And I stood on the tiles in the footstep of Eileen Gray. He knew the house’s history intimately.  Few of the original features remain, but what does is well cared for. The wood panelling on the stairs and landing is in pristine condition; the old kitchen still has features dating back more than 100 years; and the stain glass windows cast glorious jewels of light. The building has passed through various uses from being the country Georgian home of the Pounden family (Eileen Gray’s mother’s family), to being ‘renovated’ to its current flamboyant style by Eileen Gray’s brother-in-law, Sir Henry Tufnell. Around the early part of the 20th century, it lay empty for many years before being bought by the Eastern Health Board and turned into a TB hospital; with the eradication of TB, it became a nursing home, primarily for the elderly and now finally it is a thriving Gaelscoil and resonates with the sounds of young voices speaking in Irish. Eileen Gray loved Brownswood with a passion that she never surpassed even with designing and building E.1027, regarded as the most iconic house of the 20th century. She always regretted the pain of returning from Paris for the auction. But I like to believe she’d approve of its current status.”

Laura Elliot said: “Every August I go on holidays to the Wine 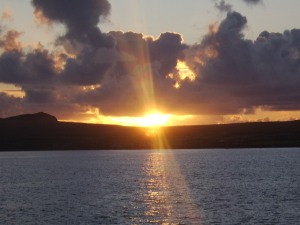 Strand.  This rugged stretch of coastland is a few miles outside the small Irish-speaking village of Ballyferriter on the Dingle peninsula. Apart from the breath-taking scenery, what makes the Wine Strand extra special are the people I meet. The same faces every year―Irish, Welsh, Scottish, and, occasionally, French―all drawn together through our love of music, song and good conversation.

My holiday routine never changes. There’s the drive across Slea Head to Dunquin and Ventry, the hair-raising journey through the Connor Pass, the walk across the beach to Ballydavid, and, always, a long, quiet stroll through a country lane where rosy-hued fuchsia grows abundantly in the hedgerows and the wild montbretia cuts a fiery swathe through the wild grass.

I pass a long-abandoned, solitary house that grows more dilapidated every year. I dream of buying it. I imagine restoring the rooms from the wreckage of time and bringing the overgrown garden back to life. But that’s a holiday dream and, even if I could afford to indulge it, I could never imagine living anywhere but Dublin.

When I started my novel, Deceptions, I needed a refuge where Lorraine, my main character, could begin her life anew. Suddenly, I was able to bring the old house to life. I decorated its walls and hung them with paintings. I tamed the overgrown garden and gathered fruit from the overhanging trees. I lit fires in the winter and threw the windows open to the summer air. From my bedroom window I watched the dawn rise redly above the surrounding hills and, as I walked the long lane in the evenings, I watched the swallows swooping through the purple twilight. Loraine found peace there…and happiness. 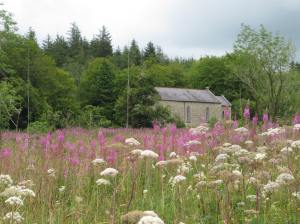 than two decades. Ever since I moved to County Fermanagh a decade ago I’ve been discovering little known places that amaze me and I’ve compiled articles I’ve written about them into a book, Fermanagh Gems. On Sunday afternoons I love to roam with my husband not far from our home along forest paths that meander up and down hill, past tiny lakes, fields of blooming wild flowers and large expanses of bog. It’s quiet and refreshing. Hidden on forested land we often stumble across long abandoned cottages and stone walls disguised by years of accumulated moss – places where time has stood still. There’s even an aged stone church that would be the perfect setting for a gothic film. The mystery of these stones moulded by man fuels my imagination and I wonder what these dwellings and farms were like so many years ago before they were abandoned. In the story I’m currently working on I’m exploring what happened in one of these cottages that drove the family from it. But I’ll keep that story to share with you another day.

Where’s your favourite place in Ireland? And why are you so fond of it?

Happy St Patrick’s Day wherever you are today.

1 Response to Where Would You Like To Be On St Patrick’s Day?