Love and Treasure: A Real Gem

I finished reading Love and Treasure by Ayelet Waldman last week and I’ve been thinking about it ever since. I’m reviewing the book as part of the novel’s blog tour with Historical Fiction Virtual Tours and, usually when I’m reading to review, I jot notes as I read but this book so captivated me that I just kept reading until I finished it. Then I gathered my thoughts to write the review.

Knopf Publishing says about the book, “A spellbinding new novel of contraband masterpieces, tragic love, and the unexpected legacies of forgotten crimes, Ayelet Waldman’s Love and Treasure weaves a tale around the fascinating, true history of the Hungarian Gold Train in the Second World War.

In 1945 on the outskirts of Salzburg, victorious American soldiers capture a train filled with unspeakable riches: piles of fine gold watches; mountains of fur coats; crates filled with wedding rings, silver picture frames, family heirlooms, and Shabbat candlesticks passed down through generations. Jack Wiseman, a tough, smart New York Jew, is the lieutenant charged with guarding this treasure—a responsibility that grows more complicated when he meets Ilona, a fierce, beautiful Hungarian who has lost everything in the ravages of the Holocaust. Seventy years later, amid the shadowy world of art dealers who profit off the sins of previous generations, Jack gives a necklace to his granddaughter, Natalie Stein, and charges her with searching for an unknown woman—a woman whose portrait and fate come to haunt Natalie, a woman whose secret may help Natalie to understand the guilt her grandfather will take to his grave and to find a way out of the mess she has made of her own life.

A story of brilliantly drawn characters—a suave and shady art historian, a delusive and infatuated Freudian, a family of singing circus dwarfs fallen into the clutches of Josef Mengele, and desperate lovers facing choices that will tear them apart—Love and Treasure is Ayelet Waldman’s finest novel to date: a sad, funny, richly detailed work that poses hard questions about the value of precious things in a time when life itself has no value, and about the slenderest of chains that can bind us to the griefs and passions of the past.”

As I’ve said, I was captivated from the first page of this book. The opening chapter is a touching vignette of the relationship between a dying grandfather and his granddaughter. This simple opening leads into a complex and sweeping novel full of intricate, carefully researched detail. Three stories are linked and held together by the history and fate of a beautiful and unlucky peacock pendant. The story weaves back and forth through the early twentieth century, the post-World War II era and the present day. The author vividly evokes the places, the societies and the people in each of these eras. For me the most powerful storyline is the one set in the post-war era. It explores fascinating and often overlooked aspects of the era and vividly illustrates the prejudices and injustices that continued after the war had ended.

As in any good novel, the characters are the focus of the story. While each era is artfully depicted, it is the characters that the story revolves around. Waldman creates a diverse cast of realistic, engaging characters. Two of the main characters are first introduced as a photo in the locket and a puzzle for two other characters to solve. As the story travels back and forth in time they are brought to life and the reader becomes engrossed in their journey.

My only criticism of the storyline was that after Jack Wiseman’s love, Ilona, leaves Europe we hear no more about her. We learn the ultimate fate of most of the characters by the conclusion of the novel but she just disappears from our radar. After investing considerable time and attention to her complicated and difficult life I felt a loss when she simply disappeared. While I note it as a criticism, my response attests to the author’s skill in creating characters who become so important to the reader that their loss is felt keenly. Maybe Waldman wanted us to feel Jack’s loss.

Love and Treasure is a poignant story: a realistic and captivating exploration of the Holocaust, from events during the years preceding it to its aftermath and legacy. Readers will not be able to put this novel down nor ignore the questions it poses about history and humanity. I can wholeheartedly recommend this book to anyone who enjoys getting to grip with stories about the real past and real emotions.

Readers can learn about Ayelet Waldman on her website, her Facebook page and Twitter. Love and Treasure can be found on its Amazon UK and Amazon US pages.

About Ayelet Waldman: She is the author of the newly 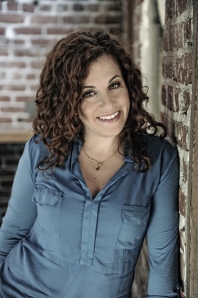 released Love and Treasure (Knopf, January 2014), Red Hook Road and The New York Times bestseller Bad Mother: A Chronicle of Maternal Crimes, Minor Calamities and Occasional Moments of Grace. Her novel Love and Other Impossible Pursuits was made into a film starring Natalie Portman. Her personal essays and profiles of such public figures as Hillary Clinton have been published in a wide variety of newspapers and magazines, including The New York Times, Vogue, The Washington Post, and The Wall Street Journal. Her radio commentaries have appeared on “All Things Considered” and “The California Report.”