Last week I finished reading Immigrant Soldier, the Story of a Ritchie Boy, by Kathryn Lang-Slattery. I received a free copy of the novel in exchange for an honest review as part of the author’s Historical Fiction Virtual Tour. 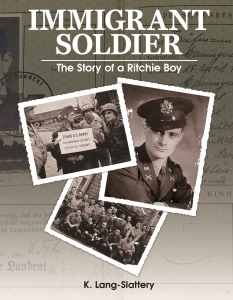 The publisher, Pacific Bookworks, states that the novel is “based on the true experiences of a refugee from Nazi Germany, combines a coming-of-age story with an immigrant tale and a World War II adventure. On a cold November morning in 1938, Herman watches in horror as his cousin is arrested. As a Jew, he realizes it is past time to flee Germany, a decision that catapults him from one adventure to another, his life changed forever by the gathering storm of world events. Gradually, Herman evolves from a frustrated teenager, looking for a place to belong, into a confident US Army intelligence officer who struggles with hate and forgiveness.”

It is easy to see that the novel is based on Herman Lang’s real experiences as it sometimes reads more like a biography than a novel, especially when imparting information about developments in pre-war Germany and during the Second World War. But, whether it seems more biography or novel, it is still an engrossing story. The book is a very thorough account of Herman’s life from 1938 when he begins to plan his escape from Nazi Germany until the end of the Second World War.

I enjoyed watching Herman grow and mature and found him a very likeable character. The author captures his youthful innocence on an English country estate and in carefree California as well as his experiences as a soldier in battle and vividly evokes the places where Herman finds himself, from pre-war Germany to a California beach town to an English estate to war-torn Europe.

The author has researched and delved into an aspect of the war that has rarely been highlighted before and brings the world of US military interpreters and their importance to US military strategy to the reading public, portraying Herman’s experiences through a series of interesting scenes and anecdotes. His experiences are made more interesting when well-known military figures such as General George S. Patton are part of his story, giving readers a glimpse into the lives of these important historical figures.

Readers who are looking for the excitement and gore of frontline battle may not be drawn to this book but anyone who wants to experience the broader canvas of the run up to and events of the Second World War will find this a fascinating read.

About Kathryn Lang-Slattery: A published author of fiction and nonfiction for youth, she became fascinated with her uncle’s World War II stories and began taping his conversations in 1996. Soon she knew she had found a fascinating untold story of Jewish refugees who became silent heroes. More than a decade spent researching, interviewing Ritchie Boys, and turning the true story of her uncle into fiction became an odyssey of discovery that resulted in the novel, Immigrant Soldier, The Story of a Ritchie Boy.