During the past four or five years, I have read several historical novels and a crime novel by Jerome Charyn. Bitter Bronx is my first foray into his short stories. 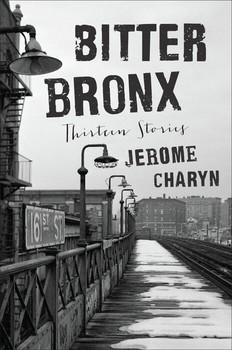 This is how the publisher describes the short story collection: “Brooklyn is dead. Long live the Bronx! In Bitter Bronx, Jerome Charyn returns to his roots and leads the literary renaissance of an oft-overlooked borough in this surprising new collection.
In Bitter Bronx, one of our most gifted and original novelists depicts a world before and after modern urban renewal destroyed the gritty sanctity of a land made famous by Ruth, Gehrig, and Joltin’ Joe.

Bitter Bronx is suffused with the texture and nostalgia of a lost time and place, combining a keen eye for detail with Jerome Charyn’s lived experience. These stories are informed by a childhood growing up near that middle-class mecca, the Grand Concourse; falling in love with three voluptuous librarians at a public library in the Lower Depths of the South Bronx; and eating at Mafia-owned restaurants along Arthur Avenue’s restaurant row, amid a “land of deprivation…where fathers trundled home…with a monumental sadness on their shoulders.”

In “Lorelei,” a lonely hearts grifter returns home and finds his childhood sweetheart still living in the same apartment house on the Concourse; in “Archy and Mehitabel” a high school romance blossoms around a newspaper comic strip; in “Major Leaguer” a former New York Yankee confronts both a gang of drug dealers and the wreckage that Robert Moses wrought in his old neighborhood; and in three interconnected stories—”Silk & Silk,” “Little Sister,” and “Marla”—Marla Silk, a successful Manhattan attorney, discovers her father’s past in the Bronx and a mysterious younger sister who was hidden from her, kept in a fancy rest home near the Botanical Garden. In these stories and others, the past and present tumble together in Charyn’s singular and distinctly “New York prose, street-smart, sly, and full of lurches” (John Leonard, New York Times).

Throughout it all looms the “master builder” Robert Moses, a man who believed he could “save” the Bronx by building a highway through it, dynamiting whole neighborhoods in the process. Bitter Bronx stands as both a fictional eulogy for the people and places paved over by Moses’ expressway and an affirmation of Charyn’s “brilliant imagination” (Elizabeth Taylor, Chicago Tribune).”

I’ve never found Charyn’s writing straightforward or easy to read. When I first read one of his novels several years ago, I found that I needed to acquire a taste for his writing style. It took some effort but it was worth persevering. His storytelling style in this collection is best described as picaresque: the plot is often episodic rather than unfolding in a linear manner and many of the characters are likeable rogues in a corrupt society.

One of the most distinctive traits of Charyn’s writing is how he uses language. When I interviewed him on this blog regarding his novel Johnny One-eye, he said that he grew up in the Bronx having no language. He had no idea newspapers such as the New York Times existed. His friendship with several librarians in a South Bronx library introduced him to the world of words and literature. From these early encounters, he developed a love of words, which fostered his own unique writing style. Often his prose seems to ramble along, tumbling together his characters’ thoughts as well as the unfolding action. His descriptions of people and places are vivid, aided by unusual metaphors and ornate language.

Characters and settings seem to interest Charyn more than the plot of the story. His characters are always unusual, often beguiling but with dark currents never too far beneath the surface. They are diverse, each with a unique, captivating voice. Like other aspects of his work, his characters are rarely straightforward. They are complex, motivated by a plethora of values and desires that often war with each other. They are also duplicitous with each other and the reader, leaving the reader wondering what to believe in the narrative.

Place is important in Charyn’s writing and nowhere more so than in this collection of stories. Set in the Bronx, these stories are conjured from the writer’s memories of his boyhood home and, no doubt, this helps to bring the place to life. The stories are mainly set in 1940s gangster run New York City, a world of violence and opulence with a moral code all its own. They evoke this place and time vividly and fondly. Despite the brutality of the criminal underworld, it is a place of lavish excess and vitality. The place and the people are larger than life.

In my interview with Charyn regarding Johnny One-eye, he said, “Fiction often has a greater truth than most historical texts…Novelists see history as story. We’re not burdened by ‘inaccuracies’.” I think this is how the reader should approach Charyn’s short story collection: suspend disbelief and enjoy the language that spills onto the page and the world the author creates. Charyn’s writing style may not appeal to every reader but it is worth giving it a try to discover the delights of his stories.

Readers can learn more about Jerome Charyn and Bitter Bronx by visiting the author’s website and the book’s Facebook page.

About Jerome Charyn: Charyn’s stories have appeared in The Atlantic, The Paris Review, The American Scholar, Epoch, Narrative, Ellery Queen, and other magazines.  His most recent novel is I Am Abraham. He lived for many years in Paris and currently resides in Manhattan.