There’s romance in the air and on the page today. This week is National Short Story Week (16th to 22nd November), an event I look forward to each year. I enjoy reading and writing this form of literature so I want to support the annual event by encouraging readers to dip their toes into short stories. Every other day this week, I’ll feature short stories from a variety authors and genres.

As I’ve already said, today we’ll dip into a few romances. They range from historical, ancient and modern, to contemporary and paranormal. Why not have a browse through the stories I’ve picked out, maybe one or more of them might appeal to you.

Four romance stories that take place in the golden season known as autumn. In Patchwork Autumn, Marty Cutter finds herself drawn to Dr. Patrick Brady, the new man in town, but who is the lady he is hoping will move to Montana? In October Spell, Jilly MacPherson still lives in the shadow of her great aunt’s reputation. As Halloween approaches, will it keep Adam Spencer at arm’s length? Bus Ride to Love finds Ellen Curtis taking the long way home, only to meet Douglas Maddock, a man who may make her think about changing her life. Lauren Patterson finds that her grandfather’s Legacy of Love may lead to a building a new legacy with Matthew Brenner.

Call of the Alpha by Lia Manning.

Jessica’s whole life is her job. She lives and breathes her work as a nurse. Even her few friends are colleagues. Outside of work, she lives alone on the edge of town, and hasn’t had a relationship in years.
One night, driving home after being gently told by her boss to take a week off, something darts in front of her car from the shadows. Something that at first looks almost animal-like.
But instead of an animal, Jessica finds a man, injured and lying in a ditch. Taking him home to treat his wounds, she soon discovers he has no idea who he is, his memories lost in the accident.

Keeping her Pledge by Dianne Ascroft.

June 1942: Pearl Grainger’s life is much more exciting and fun since the Allied troops arrived in County Fermanagh, Northern Ireland. Although she has to steel her nerve to help her brother, Davy, on smuggling runs across the border to the Republic of Ireland, she’s out dancing several times each week and meets an RCAF seaplane navigator, Pilot Officer Chuck Walker who quickly becomes special to her.

The harsh realities of war are far removed from her until the evening an RCAF seaplane crashes into a field on her family’s farm. Watching her family attempt to rescue the crew from the burning wreckage, she realises it’s time she played her part in the war effort. Pearl resolves to volunteer at the nearby US Army Station Hospital.

It’s not an easy promise to keep. Pearl’s intentions are good but nothing in her life has prepared her for the horrific sights, sounds and smells of a hospital ward during wartime. And Chuck’s disapproval and jealousy don’t make it any easier.

Can Pearl keep her pledge to do her bit for the war effort without losing the man she loves?

‘Ceremony of the Emperor’ in Tales of Byzantium by Eileen Stephenson. 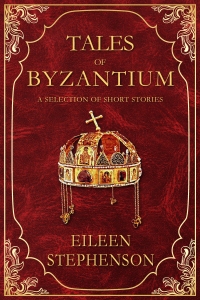 This first story in the collection is a tale of love that blossoms slowly.  It is about an emperor, Constantine Porphyrogenitus, and his wife Helena Lecapena. The two of them have been married for years (since childhood) when the story begins but the marriage is unconsummated. Constantine is not interested in doing so since he is angry at being relegated down to 3rd place in the palace hierarchy by Helena’s father, emperor Romanus, who would prefer one of his own sons to succeed him. Helena, on the other hand, realizes she will have no place in the palace unless she has children and decides to try and seduce her husband. Constantine will have none of that and rudely tells her to go away. Later, though, he decides he was too rude to Helena and apologizes. They begin to spend time together and one thing leads to another…

Check back on Wednesday when I’ll be featuring short stories by members of the ex-pat writers’ organisation, Writers Abroad.