A Chat With Pearl Goodman

Several times last week I featured short stories in a variety of genres for National Short Story Week. During the process of looking for contributors to those blog posts, I met Pearl Goodman. She has written about her experiences growing up as the child of Holocaust survivors in When Their Memories Become Mine. Since her book didn’t fit into my theme for the week, I asked her to visit this week and talk about the book.

Thanks for joining me today, Pearl. Although my questions are designed for fiction authors, they also have some relevance to your memoir. Let’s get started, shall we?

PG: Funny you should say novel because I actually came to the writing thinking as a novelist, using myself as the main character, and the events of my life as the story line. Another phrase for it is creative non-fiction. The “novel” aspect is very important because it implies a literary style and structure which is what I was using to artfully craft actual incidents. As someone who writes in the short story form, these became chapters in the book. They are arranged to move chronologically but they can also stand alone.

PG: The war in Europe from 1939-45 keeps entering our discourse, even so many years later, all over the globe. In this book, the story takes place during the ‘60s and ‘70s in Toronto, Canada, in a different era, country, and culture, yet still affected by those traumatic years. There’s no mistake there. Experiences are not confined to dates and times. We are learning more and more about how trauma defies integration and how it gets transmitted to future generations. My story is a microcosm of that process, demonstrating in very palpable ways how that transmission passes to a child growing up with Holocaust survivor parents. As she comes of age, she becomes conscious of her own reality, which is difficult enough, plus there exists an underlying, disturbing influence that is ever-present but hard to grasp. As a psychotherapist, I hope that my story can shed light on so many other traumatic events that people have endured, to raise awareness about these issues and to become more sensitive to why these experiences are so hard to overcome.

How closely did you stick to the historical If you used them loosely, how did you decide whether to deviate from them?

PG: Great question! Much of what I wrote was from actual memory. Readers seem to be struck by that, but how I understand it is, it was my way of making sense of my world. I tried to manage the inconsistencies I encountered as a child, to put them into a form, in order to stem the chaos. My ability to remember was the vehicle for that process.  Not that I relied on my memory solely!  I also checked my facts. With my parents’ story it was a little more challenging. My brother and I learned about their terrible tragedies, but the stories were always told in fragments. It was as if I was given a stick doll which then I’d have to flesh out and clothe. Again, cross-fact checking helped.  The inventive device I used was to pair what was happening to me in the present with my parents’ story from the past, to show how these connected and what the impact was; they were written as if they were occurring simultaneously.  I also used the past tense for the present episodes in my life, and the present tense for my parents’ past to show how trauma looms and lingers.

PG: The research for me was threefold. First was thinking back and remembering who I was, how I felt, and what I thought. In the words of well-respected UK/Canadian author, Kathy Page, the book is about “how a child of survivors has risen to the difficult task of excavating and articulating a family history that is both intensely personal and historically relevant.” Secondly, for the experiences my parents told me about, I cross-referenced those with Google, my resident historian. What I found was that my parents’ accounts were accurate, though their stories when I first heard them sounded inconceivable. Thirdly, my psychotherapy training also informed the writing, not so much analytically, but empathically and insightfully.

PG: For me the plot drives the need for characterization and it’s the same in reverse. I know that’s a confusing answer. Some person has to further the narrative.  If there’s a historic event in the story I am telling, there were people there at the time, obviously. I can only imagine and express in writing what they might have said, and I will shape their words to be true to history. That’s a kind of invention but it’s housed in what actually took place. When I think about all the stories I have written over the past two decades, I have no preference actually for historic figures or invented ones. I find that sometimes I write the kind of mixture we are discussing here, which is more fact than fiction, and then I write pure fiction at other times. It depends on what the inspiration has been. For example one day, a colleague was wearing a blouse with the collar showing and resting on the lapels of her blazer. That one image reverberated in my mind, and became the basis for a short story which figured a minor character in similar attire, but other than that, there was no similarity whatsoever. 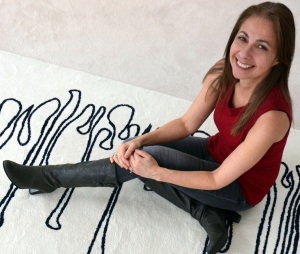 PG: One of the ways I can describe it is to say that I was given a rough sketch and I had to determine the lines, and colour it in, which was an exciting process. Having the facts is just the beginning. A writer has to make the telling come alive. I naturally think and write metaphorically, and I believe again it’s because it’s a connecting device. It conveys the idea that two unrelated things are very similar. The metaphor helps with continuity and universality. In my book, American pop culture references abound. In my early life, Television was a major teacher of mores and lifestyle, and served as a counterpoint to my immigrant parents’ sensibility. In addition, I used those references when comparing WW2 war propaganda to the American advertising industry. Also, the device of writing about my parents’ past in the present tense helped make everything more vivid, more grating, more visceral, more experiential. In my own story about coming of age, I used a lot of comic relief to create a foil for my parents’ tragedy, and to “wrestle” in literary form with whether my issues were petty or not compared to my parents’.

PG: Again I would say, it depends on the inspiration and on the historic event. At the risk of going into a discussion about gender, the choice of a male or female protagonist, at least in the past, told a very different tale. It comes down to what story you are choosing to tell. Personally, I have written from both points of view. And even if the protagonist is male, surely there is a female or two who weighs in, and vice versa. In fact, I like to make my “lesser” characters as compelling as possible, sex/gender notwithstanding.

Thanks for taking the time to answer my questions, Pearl.

PG: Thanks for these thoughtful questions. It was a pleasure to delve into the answers.

I'm a Canadian writer and author, living in Britain. My first novel, 'Hitler and Mars Bars' was released in March 2008. More information abo
View all posts by Dianne Ascroft →
This entry was posted in November 2015 and tagged creative non-fiction, Holocaust, memoir, Pearl Goodman, When Their Memories Became Mine, World War II. Bookmark the permalink.