I’d like to welcome Kaaren Christopherson, the author of Decorum, to Ascroft, eh? this morning. Kaaren has written an intriguing tale set in the late nineteenth century in what is described as New York’s Gilded Age but I’ll let my guest tell us more about it.

Welcome Kaaren. Let’s get started, shall we? 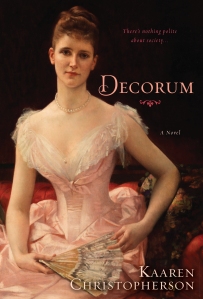 KC: Decorum is about a tycoon (Connor), an heiress (Francesca), a mistress (Blanche), and a gigolo (Edmund) who struggle to find happiness, power, and wealth amid deception, betrayal, bigamy, and murder in Gilded Age New York. Each character has his or her own challenges to overcome: though he has made his money, Connor yearns to break into the big league in New York business; Francesca is trying to move on with her life after her family has been killed; Blanche is trying to shake off her shady past and find security; Edmund, too, is looking for security—and control.

What prompted you to write about this historical period?

KC: When Connor O’Casey, Blanche Alvarado, and Francesca Lund appeared in my imagination, they were wearing Gilded Age fashions, so I never struggled to figure out what time period to portray. It was fascinating to watch these characters function at a time when the country was on the cusp of becoming modern. Horse-drawn carriages would soon be sharing the road with the first motor cars. Gas street lamps were giving way to electric lights. Only a relatively few households had telephones, so most communication that couldn’t take place face to face had to be done through letters and telegrams. Lots of plot twists can happen in the time it takes for a letter to arrive or for a horse to trot across town or to the next village.

KC: Although Decorum doesn’t recreate specific historical incidents, recreating the look, the feel, the sounds, and smells of the Gilded Age in New York and the Canadian Rockies was essential if the reader is to be “transported” to another time. Though I invented some institutions, such as Venables Gallery and the Blue Iris Tea Room, they were based on actual places. When I do decide to deviate from actual places and invent them for the story, it’s usually because I want to insert some characteristic that helps support the story. So the gallery, for example, is a conglomeration of galleries and antiquities shops I found in my research with some unique features added so that the characters could move throughout the gallery in a way that was natural to the progression of the story. I did, however, make reference to actual events or people, such as Nellie Bly and her trip around the world.

KC: I began with several survey books about the period—mostly social history about how people lived (what they wore and ate, how they were educated, what work they performed), what technology was like (as it was known at the time), what discoveries had just been made, what political or economic forces affected ordinary people, how people traveled. I didn’t try to know everything. I tried to have a good grasp of what life was like and the limitations and opportunities the period had to offer so that when the characters were set in motion they began to act with credibility. Then I started writing and let the action and the characters dictate the next phase of research, which is largely the details—what to call items of clothing, what kind of carriage might be used for a particular event, how a dinner table is set. Researching the 1890s was very interesting because of the variety of material available, not just history books, but biographies and memoirs, photographs, engravings, paintings, novels from the period, all sorts of resources that helped me get closer to the characters and their surroundings. I also took advantage of historic home shows and what the museums and historic homes in New York and Washington, DC, have to offer for steeping myself in the period. One of my favorite resources was my great-grandmother’s etiquette book called Decorum, published in 1881. It not only gave me a wealth of information on the expected behavior of the period, but also gave me the novel’s title and organizing theme.

Do you use a mixture of historic figures and invented characters in Decorum. Which is more difficult to write? Which to you prefer to write and why?

KC: All the characters in Decorum come out of my imagination. This choice was deliberate; since I was new to novel-writing I wanted to concentrate on making fictional characters as real and three-dimensional as I could. I was keenly aware that introducing real people, especially well-known historical figures who already appear larger than life, might be difficult if all characters whether fictional or real were to be equally well-developed and balanced. So the first time around, I stayed with characters I invented. In another story that might be driven more by actual events, I might include actual historical figures; it would require lots of research to try to find the actual personality behind the history.

KC: Many of the situations and their visual elements and descriptions in Decorum were inspired by studying engravings from fashion and news magazines of the 1880s and 1890s, photos of events and interiors, and American and European Impressionists. Trips to flea markets and antique shops yielded old cabinet photos that reminded me of the characters, as well as some of the items they may have used. Research on the internet yielded such things as descriptions of the original Metropolitan Opera House, the Tombs, and the Café Savarin, complete with menus. All these resources enhanced what I saw in my imagination and helped me describe it to the reader.

KC: I don’t prefer writing about characters of one sex or the other, but I do find it fascinating to watch different female characters from different backgrounds, with different personalities, experiences, motivations, and resources at their disposal tackle problems in the 1890s. So, for example, Francesca’s wealth and respectability gave her entre and acceptance into parts of society that Blanche, with her shady past, would have had a very difficult time entering. On the other hand, Francesca’s wealth didn’t shield her from a male-dominated world where her opinions could be easily disregarded and her options were few. Yet, like Blanche, if Francesca happened to make bad choices, society could be merciless. Readers can check out the wide array of female characters and their backgrounds through The O’Casey Chronicle the 1890s tabloid on my website: http://www.kaarenchristopherson.com/the-ocasey-chronicle

Thanks for answering my questions, Kaaren, and good luck with your novel.

About Kaaren Christopherson: She is the author of Decorum—a 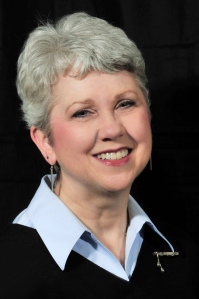 novel about Gilded Age New York—that began taking form in 1999 during a course on writing historical fiction. From that moment, Connor O’Casey (who had been rattling around in her brain for months) finally appeared one night and said, “All right, woman. Here I am. What are you going to do about my story?” So she began to put his words on paper, and he hasn’t kept quiet since. Soon Francesca, Blanche, Tracey, Vinnie, and the rest of the characters began arguing, gossiping, loving, and forming themselves into Kaaren’s first novel.

Kaaren has had a professional career writing and editing for over 30 years and is a senior editor for an international development nonprofit organization in Washington, DC.

She has written fiction since her school days, story poems, children’s books, historical fiction, and time travel, and continues to be active in writers’ groups and writing workshops. In addition to her career as a writer, Kaaren was the owner of a decorative painting business. She loves to travel and prowl through historical sites, galleries, and museums. She is active in several churches in DC and in her local Northern Virginia community, where she shares her home with feline brothers, Archie and Sammy.

A Michigan native, Kaaren received her BA in history and art and her MA in educational administration from Central Michigan University in Mt. Pleasant, Michigan.