The Varangian by Bruce Macbain

Today I’ve invited Bruce Macbain to visit Ascroft, eh? to tell us a little about his historical novel, The Varangian.

Welcome Bruce. Let’s get started, shall we? 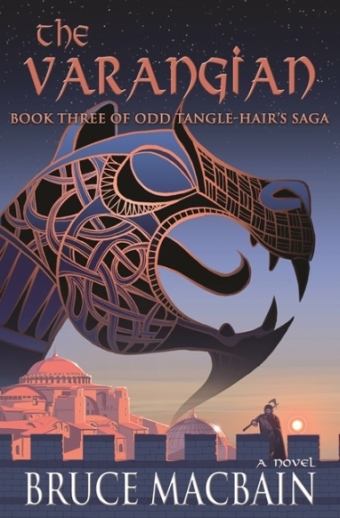 BMB: The Varangian is the final volume of my trilogy, Odd Tangle-Hair’s Saga. (The first two books are entitled Odin’s Child and The Ice Queen.)

The novels are set in the Viking world of the eleventh century and range over a wide territory, all the way from Iceland to Russia to Constantinople and Sicily. The title of the book refers to the Varangian Guard, the bodyguard of the Byzantine emperors, which was recruited from Norsemen. The most famous of these, in actual fact, was the Norwegian prince Harald the Ruthless. But Harald is the villain of my piece, the nemesis of my hero Odd Tangle-Hair.

Odd was driven from his Iceland home as a boy and set out on a life of exploration and adventure, sometimes as a Viking freebooter. He is a skilled poet, curious and intelligent, gifted at languages, and, most significantly, a committed pagan, like his father before him, in a world that is rapidly turning Christian. He tells us his story in his own voice: ironic, perceptive, frequently humorous.

In Constantinople, Odd attains the height of power as commandant of the Guard, falls in love and marries. And then–disaster strikes him. I’ll say no more about the plot.

BMB: Although my academic background is in Classical Studies (and I’ve written two novels set in ancient Rome), the Vikings are my second favorite folks–especially after visiting Iceland and falling in love with the country. I chose the 11th century as my period precisely because I’m interested in the subject of religious and cultural transformation. I know this sounds a bit pedantic, but it really isn’t: it’s rich territory for a novelist.

BMB: My philosophy of historical novel writing is: do thorough research; use all the facts you can; bend them a little if you have to; when you run out of facts, make them up; and always append an Author’s Note explaining briefly what is factual and what isn’t. I think if you do that, you’re playing fair with the reader.

BMB: There are innumerable books about the Vikings and about the Byzantines. But fundamental are the Icelandic sagas, wonderful works of early Medieval literature which bring that world as close to us as it can ever be. On the Byzantine side is the history of Michael Psellus (the Penguin translation is called Fourteen Byzantine Rulers). Psellus, who lived through this period is not only a source but a character in my novel. I had a lot of fun with him.

Do you use a mixture of historic figures and invented characters in the novel. Which is more difficult to write?

BMB: I do use a mixture of historical and invented characters. Each of those presents its own difficulties. Obviously, with real characters you have something to start with, but you also have an obligation to get them right. Fictional characters give you more freedom, but you have to do all the work yourself.

Which do you prefer to write and why?

BMB: I always enjoy doing both; I don’t think I could write a novel any other way.

BMB: Well, with difficulty. All I can say is that I read everything, especially travelers’ accounts; looked at lots of pictures; went to the locales (as far as my budget permitted); and then, after all that, sat back, closed my eyes, and turned on my imagination.

BMB: I will be the first to admit that I have a harder time with female characters. In The Varangian there are two principal female characters. One is fictitious: Selene, the girl Odd falls in love with; the daughter of an alchemist, she dresses as a boy and earns her living gambling in the taverns. The other is historical: Empress Zoe–bizarre, eccentric, tormented, foolish, possibly homicidal. She is described for us in great detail in Psellus’s history. What a gift to any author!

Thanks for answering my questions, Bruce.

The Varangian is available on Amazon | Barnes & Noble | IndieBound

About the author: Bruce Macbain holds degrees in Classics and Ancient History and was formerly an Assistant Professor of Classics at Boston University. He decided to stop writing scholarly articles (which almost no one read) and turn his expertise to fiction—a much more congenial medium. His previous novels include two mysteries set in ancient Rome (Roman Games, The Bull Slayer) and the first two novels in the Odd Tangle-Hair series (Odin’s Child, The Ice Queen).