Today I’d like to welcome Catherine Magia to Ascroft, eh? She’s here to tell us a bit about her novel The Fisherman’s Bride.

Welcome Catherine. Let’s get started, shall we? 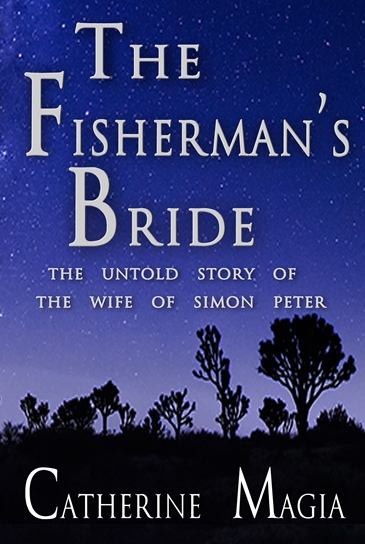 CM: My novel tells the story of the unnamed wife of St. Peter, a woman who shuns a loveless betrothal to a wealthy merchant and instead marries a poor fisherman whom she desperately loves.  For being true to her heart, she is disowned by her family.  This is the tale of her relationship to the fisherman known as Simon Peter, and the story of Israel during the times of the Roman occupation, a time of revolution and danger, a time of economic hardship and heavy taxation, and a beckoning new hope they find in an enigmatic young carpenter: Jesus.

It is a tale of love, faith, and the strength of the human spirit.  It is also a rich chronicle of the culture of the time, and biblical history as told through the eyes of a woman.

CM: My own spiritual journey inspired The Fisherman’s Bride, the journey from brokenness to healing.  Eight years ago, I hit the lowest point in my life personally and professionally. I had post-surgical complications at the same time that I was laid off from my job and ended a long term relationship.  I was utterly lost.  I traveled and wandered for about a year, searching for my path.  Along the way, I learned lessons of authenticity, courage, and humility.   During a retreat in the Shenandoah Valley, being chased by cows with a Bible in hand, I discovered a new inspiration.  I imagined the story of a woman who was abandoned by her husband, a man who left without a word to follow Jesus, a man we know as Simon Peter.

I spent the next 7 years researching and writing this novel.

CM: To the best of my ability, I tried to be as historically accurate as possible.  I was also faithful to the Christian interpretation of the facts.  It was my goal to revisit the ancient story and to not change it or make it revisionist, but to reveal layers of humanity and complexity and struggle which were not explored before.  The interesting thing about biblical history is that there are so many gaps.  It is within these gaps that I felt free to invent.

For example, Simon Peter’s wife never had a documented name.  There are rumblings and hearsay that her name was Perpetua, which is a Roman name and she was almost certainly Jewish.  To be authentic, I elected to not give my protagonist a name and told the story in the first person instead.

The chronology of Jesus’ journey also varies somewhat from different gospels.  Which miracles happened first?  One source indicated the turning of water into wine; others indicated the healing of Simon Peter’s mother-in-law.  Where there was room for interpretation, I let my imagination roam.

CM: I researched using a plethora of books on the history of the time, books on culture and fishing society, revolution and how the Roman occupation of Israel was much like the Nazi occupation of Europe, as well as the gnostic gospels, Gospels of Thomas, Mary Magdalene, and Judas, as well as the well-known gospels in the accepted canon.  I also consulted prominent first century theologians like Clement of Alexandria.

In addition, I traveled to the Middle East (Israel, Jordan, Egypt, and Turkey) several times throughout the course of seven years to research the places I mentioned in the novel.

CM: Both historic figures and invented characters have different possibilities and different challenges in the writing process.  Historic characters are interesting because they are grounded in reality, so it is a balance of compatibility with what is already known, and credibility in the new revelations that I unveil as an author.  I have more freedom with invented characters because I am creating new personalities, but the difficulty lies in making them relevant to the plot and overall storyline without trespassing on history.

I find it more difficult to write about historic characters like Simon Peter or the other disciples because it is about providing depth into who they were and making them relatable in a personal way.  Simultaneously, I strive to reveal a fresh and original perspective on these famous figures.

The best of both worlds is in writing about a little-known historic character, who is so obscure as far as documentation is concerned, that I can be free to imagine a story that works seamlessly within the realm of historical fact.  Like the wife of Simon Peter.

CM: When I traveled to the Middle East, I sought to get an authentic sense of the time and place.  I remember the angle that the sun rises, how the trees are bent and twisted, the color of the sand and the earth.  I touched the stones in old Jerusalem and felt the scorching winds on my skin.  I traveled to Capernaum and Galilee, Bethlehem and Nazareth, Bethany and the Jordan River, and allowed myself to be transported back to the times of Jesus.

Additionally, I listened to the stories of the people.  There are so many legends and folk tales, oral histories passed from generation to generation, that have not been documented.  These sources provide such wonderfully rich insight to how things must have been.

There often seems to be more scope in historical novels for male characters rather than female characters. Do you prefer to write one sex or the other?  If so, why?

CM: I have always been fascinated by the stories of the women around famous men.  Very often they are invisible or nominally mentioned in a footnote or as an aside, and their role is marginalized.  So much of history is opinion, and the voices of these exquisite women have become lost through time.

I wrote the story of Simon Peter’s wife because I was enthralled with what her story must have been.  Clement of Alexandria documented her death as a martyr prior to the crucifixion of her far more famous husband.  In a time when men dominated as the undisputed leaders, this woman set the ultimate example of courage for husband by dying for her faith.  She must have been extraordinary.   Yet, she did not even have a name.  What was her story? What were her struggles?  What were her dreams?

In many ways, I discovered her story as much as created it.  The plot unfolded as I visualized an abandoned woman dragging fish along the shore.  I heard through her voice, a beautiful and sensitive soul struggling in her relationship with her husband, loss of their child, and the unfurling of a new faith.

I was compelled to commit this story to the page.

Thanks for answering my questions so thoroughly, Catherine.

Readers can learn more about Catherine and her writing by visiting her website and blog.

The novel is available at these online retailers: 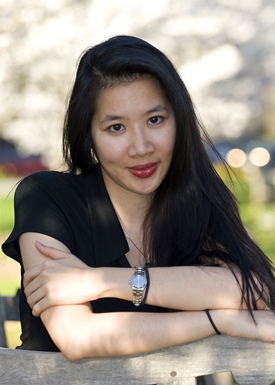 About Catherine Magia: Catherine was born in Brooklyn, New York, and moved to New Jersey as a teenager. Although her formal education was in the hard sciences, she has always maintained a passion for the written word, publishing her poetry in several literary journals including the Michigan Quarterly Review.

She discovered the voice of Simon Peter’s wife on a soul-searching journey, a trek through the biblical lands of Israel, Jordan, and Egypt. She spent seven years researching and writing her debut novel, traveling as far as Ephesus, Turkey.

She is working on her second book – the conclusion to The Fisherman’s Bride.

By day, she works as an associate director of marketing research in the development of new cancer medications. She is currently based in Boston.