Thumbing Through The French Collection

Posted on November 8, 2017 by Dianne Ascroft

Today I’ve invited Vanessa Couchman, author of the French Collection and a fellow member of Writers Abroad, to visit Ascroft, eh? to talk about her new collection of short stories set in France, which will be launched tomorrow.

Welcome, Vanessa. Let’s get started, shall we?

Tell us about your short story collection. 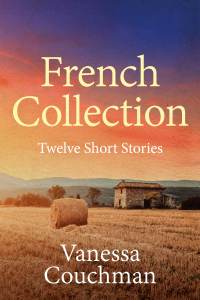 VC: Thanks for hosting me on your blog today, Dianne. Before I turned to novels, I started by writing short stories – and in fact I still do. My husband and I moved to southwest France 20 years ago and many of my stories are set in France. It has a fascinating history and culture and provides many anecdotes and plenty of inspiration for writers. To celebrate our two decades in France, I decided to choose a selection of my stories and publish them in a short volume, French Collection: Twelve Short Stories.

What research did you do for this book? How closely did you stick to the historical facts? If you used them loosely, how did you decide whether to deviate from them?
VC: I love the research aspect of writing historical fiction. Often, when I’m researching a particular topic, I come across another one by chance that leads to a story in itself. Some of the research you do never gets used, except to provide contextual background, but that is important, too.

Some of the individual stories required quite a lot of research. Several of them are set during World War I, for example, and it’s important to be accurate when referring to real historical events. One of the stories, ‘Bertie’s Buttons’, was inspired by the Christmas Truce of 1914 when soldiers from both sides all along the Western Front emerged from their trenches and met in No Man’s Land. In addition to researching the known facts about these events, I also came across a few personal accounts, fortunately available on the Internet. The personal viewpoint adds depth and authenticity.

Another story concerns a pedlar who was chased from a southern French village in 1628 during a plague outbreak. This is based on a true story, but the known facts about the event are very limited, so I had to embroider those quite a bit within the context of what is known about the plague epidemic that year.

Do you use a mixture of historic figures and invented characters in these stories? Which is more difficult to write? Which do you prefer to write and why?

VC: Mostly, the characters in French Collection are invented. The only story that uses real historic figures is entitled The Artist and the Acrobat. In that, the celebrated painter Edgar Degas wants to paint Miss La La, who was a circus performer in the 1870s-80s, renowned for her great physical strength and acrobatic feats.

I find I prefer to write about invented people, although sometimes they comprise aspects of real people. I suspect it is more difficult to write about known historical figures, since the scope for invention is much more limited. You can allow yourself freer rein if you make up the characters. Also, it intrigues me to write about ‘normal’ people who are affected by global events.

VC: Many of the stories are set in places I know in the area where we live. Some of them have barely changed since medieval times, which makes it easier to imagine how it might have been to live in them. I have also read a lot about the history of the area and I am always interested to learn about anecdotes that reveal how life was at a certain period. The French have a strong tradition of romans du terroir (novels set in the countryside) and a firm attachment to their rural roots. You get a good idea about French life in bygone days from those.

There often seems to be more scope in historical fiction for male characters rather than female characters. Do you prefer to write one sex or the other. And, if so, why?

VC: I don’t think I have a preference. In my novels, I have tended to write about female main characters. In the 12 short stories in French Collection, five of the main characters are male and seven are female. One of the themes in my work is how French society changed during the 20th century – and particularly the effect of these changes on women, which happened slowly but surely. But, overall, I tend to use characters that best fit the story, whether male or female.

Thanks for answering my questions, Vanessa and good luck with your new release, French Collection.

Readers can learn more about Vanessa and her writing by visiting her website and connecting with her on Facebook and Twitter. She also writes a blog about life in France which you can find here.

About Vanessa Couchman: Vanessa is a British novelist and short story writer who has lived in southwest France since 1997. She has written two novels, The House at Zaronza and The Corsican Widow, and is working on a third. Her short stories have been placed in competitions and published in anthologies. French Collection, her collection of short stories set in France, is published on 9th November.

2 Responses to Thumbing Through The French Collection