Will you give me a push?

It’s World Book Day today so what better day for me to begin the final push to ‘birth a book’? 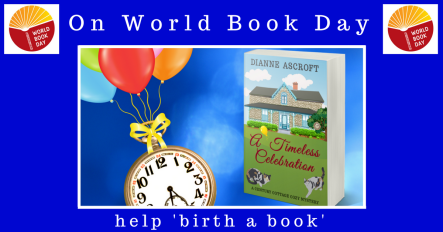 What am I on about? Let me explain a bit. After writing historical fiction for several years now, last summer I began writing my first cozy mystery, A Timeless Celebration. The novel is set in the fictional town of Fenwater, which was inspired by a small town in Ontario, Canada where I spent a lot of time during the 1980s. The town made such an impression on me that I decided it would be a great place to set my new series of mystery novels, the Century Cottage Cozy Mysteries.

A Timeless Celebration, the first book in the series, opens as a Titanic artefact is stolen a week before Fenwater’s 150th anniversary celebration and it’s up to Lois Stone to catch the thief. Middle-aged widow Lois has moved from bustling Toronto to tranquil Fenwater and is settling into her new life, feeling secure away from the dangers of the city. Then two events happen that shatter her serenity: her house is burgled and an antique watch belonging to a Titanic survivor is stolen. Her best friend, Marge was responsible for the watch’s safekeeping until its presentation to the local Museum at the town’s 150th anniversary party and its disappearance will jeopardise her job. Marge has always been a wonderful friend and Lois won’t let her reputation be tarnished or her job endangered by an accusation of theft. She’s determined to catch the thief and find the watch in time to save her best friend’s job and the town’s 150th anniversary party.

During the past two years, I’ve released six novellas in The Yankee Years series and paid the production costs for each book myself while keeping the retail price very reasonable – and that means each book sale generates only a small profit so I have little to reinvest. I also hired an amazing narrator and funded the production of two audiobooks, An Unbidden Visitor, and Dancing Shadows, Tramping Hooves. After producing these books, I’ve invested as much as I reasonably can for the foreseeable future.

But I’m really excited about this new series and I want to keep the momentum going so I decided to raise the funds to produce the first book by asking readers to pre-order their copies through a Kickstarter campaign. When you make a pledge, besides pre-ordering A Timeless Celebration, there’s also the chance to get the two collections of stories in The Yankee Years series as well as a prequel story to the Century Cottage Cozy Mysteries series. Have a look at my campaign page to see what you receive when you make a pledge to pre-order a copy of A Timeless Celebration. You’ll find the information here: https://www.kickstarter.com/projects/1073238739/1229889383?ref=462159&token=0e81cee8

In order for Kickstarter to release the money to me, I need to receive enough in pre-order pledges to meet the funding goal I set. If the total amount of money pledged falls short of the goal, I won’t receive any of it.

So, will you give me a push to help birth A Timeless Celebration? I’m inviting you to visit my Kickstarter page for more information and I hope you’ll join the readers who are helping this book become a reality by pledging to pre-order your own copy.

Thanks for your help!