What Can You Do About A Genuine Fix?

Today J.C. Kenney is visiting Ascroft, eh? to tell us about A Genuine Fix, his latest novel in the Allie Cobb mystery series. 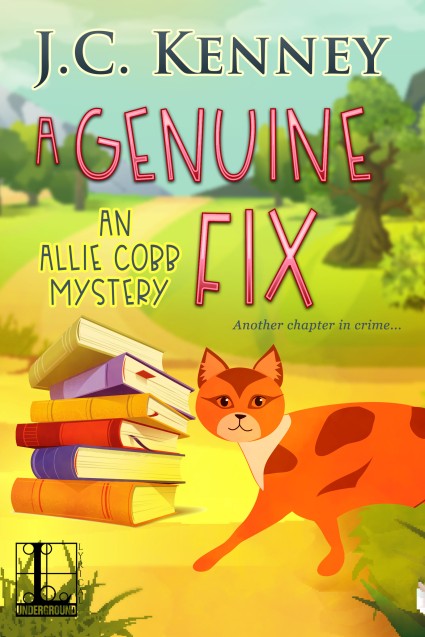 JCK: A Genuine Fix is book two in the Allie Cobb Mysteries series. Set in the fictional southern Indiana town of Rushing Creek, it follows the exploits of amateur sleuth Allie Cobb. She’s got a lot on her plate, that’s for sure.

Running the family literary business while preparing for her best friend’s wedding, chairing a park planning committee, and getting her rescue cat to bond with her boyfriend’s golden retriever doesn’t leave Allie Cobb much time for crime-solving. But when the guy who stood her up the night of her high school senior prom is killed and dumped in a pile of mulch, Allie’s suddenly the prime suspect.

It’s insulting enough that gambler, drunk, and all-around lowlife Georgie Alonso was found on the site of the memorial park honoring Allie’s deceased father. Now she’s fighting to clear her name and hold off a rush to judgment. But politics, decades-old secrets, and a slew of high-profile suspects make dangerous bedfellows as the eve of the park’s grand opening draws nearer. She’ll have to nab a killer soon, before her storybook life gets a bad ending . . .

While the Allie Cobb Mysteries are all set in Rushing Creek, they can be read as standalone stories. Like so many mystery series, though, the books do build on each other, so it can’t hurt reading A Literal Mess, book one of the series, before reading A Genuine Fix.

JCK: Every other year, I have a huge pile of landscaping mulch delivered to my home. One day, I found myself wondering how big of a pile would be needed to serve as a murder weapon. That led to some interesting, and creepy, research into what would happen to someone who was buried under a pile of mulch. From there, I needed to figure out the circumstances under which someone could plausibly use mulch to take someone else’s life.

JCK: One of my objectives in writing A Genuine Fix was to ask the question of whether the end justifies the means. If so, is something as drastic as murder ever justified? I think a lot of people would say yes when it’s a matter of self-defence, but are there any other circumstances when it might be acceptable?

JCK: As I work on a story idea, I build a cast of characters, initially based on what role they play in the story, for example, the best friend or the chocolate store owner. Once I get my cast of characters in place, I form a picture in my mind of what each character looks like, everything from skin tone to hair color to style of dress. For my main characters, I also think about what their likes and dislikes are. For example, Allie Cobb, my main character, likes to kickbox to heavy metal music. Whenever possible, I try to give my characters enough of a background to make them seem like real people you might have a cup of coffee with.

If I had to choose one character to shine the spotlight on, it would probably have to be Sloane Winchester, Allie’s best friend. Sloane’s a kind-hearted soul whose love of life reminds Allie that there is a lot of good in the world, even on the darkest of days.

JCK: I’m fortunate in that the setting for the Allie Cobb Mysteries, Rushing Creek, is modelled after the real-life town of Nashville, Indiana, which is only an hour south of where I live. It’s easy to visit the town for a day or weekend to take pictures, shop, and basically immerse myself in the real-life version of Rushing Creek.

I also have a map of Nashville that I turned into a map of Rushing Creek. Whenever I mention a business, house, or other landmark in one of my stories, I make sure it has a spot on the map. It’s been a wonderful tool to make sure I don’t put two businesses in the same location.

JCK: Most of my research tends to focus on two things. The first is Allie’s career as a literary agent. I confer with my literary agent often to make sure I’m getting Allie’s “day job” correct. The second is the murder weapon. I often ask myself, what would it take for someone to die from such-and-such weapon or action. I’ve studied macabre subjects from downing to poisoning to blowing up a propane gas tank. It’s fascinating research because I learn how things work.

I also watch a lot of crime shows and read a lot of mysteries. I never know when I’ll be watching or reading a story and something catches my attention. Murdoch Mysteries is one of my favorites for this kind of research. Plus, it’s a fabulously entertaining show.

JCK: I don’t want to give away too much, but readers get to see a lot more of Allie’s cat, Ursi, in A Genuine Fix. There are also a lot of opportunities to get to know some characters better while getting to meet new ones.

Lastly, I want to mention that Allie’s adventures solving crimes aren’t over with A Genuine Fix. Book 3 in the series, A Mysterious Mix Up, arrives next January!

Thanks for answering my questions, J.C., and good luck with A Genuine Fix, the latest book in the Allie Cobb Mystery series.

About J.C. Kenney: He is the author of the Allie Cobb Mysteries, which are set in the fictional small town of Rushing Creek, Indiana. He lives in Indianapolis with his wife, two sons, and a snuggly kitty cat. He loves motor sports, so when he’s not writing, you can probably find him checking in on the latest from IndyCar and other forms of racing. J.C. is a member of Sisters in Crime.

2 Responses to What Can You Do About A Genuine Fix?