Why Not Stop By the Library Today?

Today Allison Brook is visiting Ascroft, eh? to tell us about Buried in the Stacks, her latest novel in the Haunted Library mystery series.

Welcome, Allison. Let’s get started, shall we?

AB: BURIED IN THE STACKS is the third book in my Haunted Library mystery series, which takes place in Clover Ridge, a picturesque village in Connecticut. Carrie Singleton, my 30-year-old sleuth, is head of programs and events of the Clover Ridge Library. A kind and caring person, she often finds herself embroiled in mysteries and murder.

In BURIED IN THE STACKS, Carrie fears that a group she’s joined to create a daytime haven for the homeless plans to use the facility as a front for illegal activities. She is also investigating the murder of Dorothy Hawkins, the unpopular and disagreeable reference librarian. In the past, the ghost of Evelyn Havers, a woman who used to work in the library, has helped Carrie in her investigations. But this time Evelyn’s relatives are involved and she holds back vital information.

AB: Dorothy, the reference librarian has caused problems for Carrie because she felt she should have been offered Carrie’s job. Dorothy is also Evelyn’s niece, and capable of less than honourable actions. Which is why Evelyn is reluctant to share important information with Carrie.

AB: The homeless often seek shelter in libraries during the cold months of winter. This is not a very good arrangement. I thought it would be nice if the people of Clover Ridge created a place where the homeless could spend those days in a facility that offered them assistance and interesting activities.

AB: I suppose I envision my characters then give them free rein. They are very real to me—well-developed, with personality and flaws.

I adore all my characters, which is a good thing because so many of them appear throughout the series. Evelyn is a favourite character because, while she often helps Carrie, she’s sometimes unpredictable. I like spunky Angela, Carrie’s best friend who works at the circulation desk and tells it like is. She’s a great sounding board when Carrie’s sleuthing. As is Dylan Avery, Carrie’s handsome, clever boyfriend, who is a professional investigator in his own right and never puts Carrie down. Carrie’s great aunt and uncle, her boss Sally, her little cousin Tacey—the only other person who can see Evelyn—and Smoky Joe, the library cat who really belongs to Carrie are all delightful characters that add a dimension to the storyline.

AB: Much of the story takes place in the library. I help my readers envision the interior of the library. They get to know the other librarians, Carrie’s two assistants, the programs and events that Carrie presents as well as her day-to-day responsibilities.

I have described the village, which is centuries old, and the Green which the library faces as do many other buildings that have since been converted to galleries, restaurants, and shops. I describe restaurants that Carrie and her friends frequent.

AB: While Clover Ridge is a made-up village, I have based it on a real village. I do a great deal of research regarding this real place when setting various scenes.

Thanks for answering my questions, Allison, and good luck with Buried in the Stacks, the latest book in the Haunted Library Mystery series. 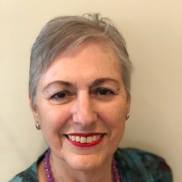 About Allison Brook: Allison Brook is the pseudonym for Marilyn Levinson, who writes mysteries, romantic suspense, and novels for kids. She lives on Long Island and enjoys traveling, reading, watching foreign films, doing Sudoku and dining out. She especially loves to visit with her grandchildren on FaceTime.