Sink your teeth into this mystery

Today Debra H. Goldstein is visiting Ascroft, eh? to tell us about Two Bites Too Many, her latest novel in the Sarah Blair mystery series.

Welcome, Debra. Let’s get started, shall we?

DHG: Two Bites Too Many is the second book in Kensington’s new Sarah Blair cozy mystery series. In the first book, One Taste Too Many, which was released in January 2019, we met Sarah, for whom cooking from scratch is a fate worse than murder. Married at 18, divorced by 28, the only thing she got out of her divorce was her Siamese cat, RahRah. She’s the polar opposite of her twin sister, Emily, an accomplished chef. Of course, when Emily is accused of killing the rat who was Sarah’s ex-husband, with a taste of her award-winning rhubarb pie, Sarah must clear Emily’s name while trying to avoid stepping into a kitchen.

In Two Bites Too Many, things are finally looking up for Sarah. She’s settled into a carriage house with RahRah, has managed to hang on to her law firm receptionist job and – if befriending flea-bitten strays at the local animal shelter counts – lead a thriving social life. For once, she even seems to have it together more than Emily, whose efforts to open a gourmet restaurant have literally hit a dead end when the president of the town bank and city council is murdered. Unfortunately, all eyes are on the one person who was found at the scene with blood on her hands – the twins’ sharp-tongued mother, Maybelle. Determined to get her mom off the hook, Sarah must collect the ingredients of the deadly crime to bring the true culprit to justice before another victim lands on the chopping block.

DHG: After my first two books (Maze in Blue and Should Have Played Poker) were each orphaned, I knew I wanted to write a cozy mystery. The problem was that I don’t like cooking and I’m horrible at crafts –the traditional topics for cozy mysteries. Before I gave up in total despair, I realized there had to be other people like me – talented in other areas, but who love reading cozies. Consequently, Two Bites Too Many brings together my fear of being in the kitchen with my interest in economic development, city politics, and animal rescues.

DHG: In Two Bites Too Many, the strength and love of family ties, no matter what other things are happening in one’s life, comes through. Sarah has a comfort zone she has worked hard to achieve, but the desire to protect her mother and sister motivates her to step outside that zone in ways she never dreamed possible. I think my fiction mimics real life in that no matter what is going on in our lives, we do whatever is necessary for those we love.

DHG: My characters spring from my mind, but often steal traits from real life people. Sarah and Emily are my favourite human characters for two reasons:  they are twins, but opposites not only in appearance, but in their reaction to kitchens. I am the mother of boy-girl twins whose appearance and behaviour are like night and day. Even though, Sarah and Emily are girl-girl twins, I incorporated my children’s differences as a tribute to them and because it is what I know.

I’ve already mentioned that cooking from scratch scares me to death. The irony is that my younger sister is an excellent cook. When we were children, she shadowed my mother in the kitchen every evening as my mother prepared dinner. I flopped on the couch and watched Perry Mason re-runs. During the first commercial I emptied the dishwasher, the second commercial was when I set the table, my father came home during the third commercial, so I said “Hi,” and right after the final scene, our family had dinner. I couldn’t resist giving our cooking traits to Sarah and Emily, but that’s as far as my “borrowing” goes.

RahRah and Fluffy, who are on the cover of Two Bites Too Many are my favourite animal characters. RahRah memorializes a friend’s Siamese cat and my friend’s devotion to her pet. Fluffy is a conglomerate of dogs our family has owned. I’m partial to both because they bring out the best in all of us.

DHG: I try to incorporate specific references or oddities from real life settings to bring my fictional ones to life. For example, my Wheaton, Alabama deliberately features a glorious white steepled church, a river walk, and alabaster marble buildings. At one time, all of these existed in Wetumpka, Alabama – until two deadly tornadoes went through the town. I’m especially pleased the church is part of my Sarah Blair series because that beautiful structure was one of the buildings destroyed by one of the tornadoes.

DHG: Many people think writing a culinary related novel is easy – everyone knows how to cook and can write “what they know.” That isn’t the case for me. Instead, I had to read articles and recipes; interview waiters, restaurant managers, and restaurant owners; take behind the scenes restaurant tours; and, experiment with making the recipes contained in my books. To nail the behaviour of the animals in Two Bites Too Many, I drew on my personal experience with dogs, but spent hours interviewing cat owners, googling different types of cats, and reading articles about cat behaviour. For the next book in the series, Three Treats Too Many, which will be published in 2020, I shadowed a veterinarian for a day and spent countless hours reading about motorcycles and interviewing a motorcycle enthusiast.

DHG: The character of Sarah Blair is meant to be a no frills, down to life, not always secure, person. RahRah is a cool, collected, female who is alpha in her relationship with Fluffy and Sarah. Two Bites Too Many has two purposes: subliminally make you think about important topics while enjoying each page of a plotted whodunit. Fun is what you should experience reading Two Bites Too Many.

Thanks for answering my questions, Debra, and good luck with Two Bites Too Many, the latest book in the Sarah Blair Mystery series. 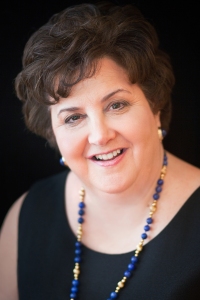 About Debra H. Goldstein: Judge Debra H. Goldstein is the author of Two Bites Too Many, as well as One Taste Too Many, the first of Kensington’s new Sarah Blair cozy mystery series. She also wrote Should Have Played Poker and IPPY Award-winning Maze in Blue. Her short stories, including Anthony and Agatha nominated “The Night They Burned Ms. Dixie’s Place,” have appeared in numerous periodicals and anthologies including Alfred Hitchcock Mystery Magazine, Black Cat Mystery Magazine, and Mystery Weekly. Debra serves on the national boards of Sisters in Crime and Mystery Writers of America and is president of the Southeast Chapter of MWA and past president of SinC’s Guppy Chapter.

I'm a Canadian writer and author, living in Britain. My first novel, 'Hitler and Mars Bars' was released in March 2008. More information abo
View all posts by Dianne Ascroft →
This entry was posted in Archives, September 2019 and tagged cats, cozy mystery, culinary mystery, Debra H. Goldstein, dogs, mystery, One Taste Too Many, Three Treats Too Many, Two Bites Too Many. Bookmark the permalink.

2 Responses to Sink your teeth into this mystery