How do you paint a ghost?

Today Sybil Johnson is visiting Ascroft, eh? to tell us about Ghosts of Painting Past, her latest novel in the Aurora Anderson mystery series.

Welcome, Sybil. Let’s get started, shall we?

SJ: Ghosts of Painting Past is the 5th book in my Aurora Anderson mystery series featuring computer programmer and tole/decorative painting enthusiast, Aurora (Rory) Anderson. The books are set in the fictional town of Vista Beach, California.

During the weeks leading up to Christmas, Rory plans on painting ornaments to sell at the local craft fair and joining in on the holiday fun. But she finds the season anything but jolly after the house across the street is torn down, revealing a decades old crime. Past meets present when her father is implicated in the murder.

Fearing for her father’s future, Rory launches her own investigation, intent on discovering the truth and clearing his name.

SJ: For the last eight years, there has been continuous construction on our block. Four houses have been torn down and replaced with larger ones so far. We’re going into the ninth year (not joking) and there’s no end in sight. To deal with all of the annoyance and frustration this causes, I play the What if game, coming up with various mystery plots dealing with construction. One of those thoughts was: “What if a skeleton was found on a lot where a house was being torn down?” The story took off from there.

SJ: This book takes place around Christmas. Every time I think of the holidays, I think of family so I decided to have the story revolve around Rory’s parents. I also incorporated different kinds of families and thought about what people will do for their own family members when creating characters for the story.

SJ: I think every character I create has a little bit of me in them, which I suspect is true of most writers. Rory’s personality is probably the closest to mine of all of the characters I’ve created. I think of her as a better version of myself. I was in software development for many years and that’s what she does as well. We both enjoy decorative painting, but she’s a better painter than I am! Her best friend, Liz, is pretty much the complete opposite of Rory, both physically and personality wise. Where Rory is tall (6 feet—I always wanted to be tall), Liz is short. Liz is also much more outgoing and extremely confident. I like to say she’ll talk to anyone, anytime about anything. In some ways, she has characteristics that I wish I possessed myself.

For other characters, I take inspiration from the people I meet, even those brief encounters we have every day, as well as from reality show contestants and from people I know. Everything percolates in my brain and new characters come out.

Liz is probably my favorite character to write. Through her I get to “do” things I’d never do myself in real life.

SJ: I live in a beach city similar to the fictional one I write about. As soon as I know what time of year the story I’m working on will take place, I look to see what events and festivals happen in my area around that time and see if I can incorporate similar ones into the story. In A Palette For Murder I featured a chalk art festival that was loosely based on one that takes place every year in a nearby city and in Ghosts of Painting Past I put in a pier lighting ceremony that is very similar to one that takes place in the town I live in.

SJ: Since I do live in a city that’s similar to the one I write about, research often consists of just walking around town and seeing what’s going on. If I plan on putting in a festival like the chalk art festival I mentioned earlier, I try to attend the event I’m basing it on to get a feel for it. If that’s not possible, I do a lot of googling to see what I can find out about it. I pay special attention to any pictures and videos people post.

SJ: While Ghosts of Painting Past is the 5th book in the series, you don’t have to read the others to enjoy this one. I write all of my books so a reader can pick up any of them and get into the story without having to know what happened in the ones before it.

Thanks for answering my questions, Sybil, and good luck with Ghosts of Painting Past, the latest book in the Aurora Anderson Mystery series. 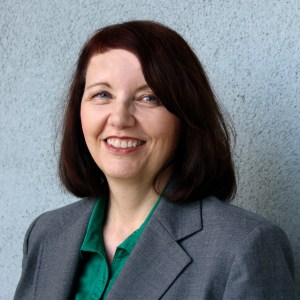 About Sybil Johnson: Sybil’s love affair with reading began in kindergarten with “The Three Little Pigs.” Visits to the library introduced her to Encyclopedia Brown, Mrs. Piggle-Wiggle and a host of other characters. Fast forward to college where she continued reading while studying Computer Science. After a rewarding career in the computer industry, Sybil decided to try her hand at writing mysteries. Her short fiction has appeared in Mysterical-E and Spinetingler Magazine, among others. Originally from the Pacific Northwest, she now lives in Southern California where she enjoys tole painting, studying ancient languages and spending time with friends and family.

1 Response to How do you paint a ghost?