Being a Snowbird can be dangerous

Today Sarah E. Glenn, one of the duo who co-wrote Murder at the Million Dollar Pier with Gwen Mayo, is visiting Ascroft, eh? to tell us about this latest novel in the Three Snowbirds mystery series.

Welcome, Sarah. Let’s get started, shall we?

SEG: Murder at the Million Dollar Pier is the second book in the Three Snowbirds series. It’s set at the height of the land boom in 1920s Florida, and our intrepid trio are among the early snowbirds who decided to winter in the Sunshine State. During their travels, they encounter opportunists, gangsters, and dead bodies.

In this book, the snowbirds arrive in Saint Petersburg and lodge at the newly-opened Vinoy. Their first night in the dining room, Snowbird Teddy Lawless comes face-to-face with Ansel Stevens, her ex-fiancée and the man who ruined her reputation and estranged her from her family. She was not prepared to be civil, then or during a second encounter at the Coliseum. When Ansel subsequently dies of poisoning, retired nurse Teddy quickly becomes the prime suspect. Cornelia and Professor Pettijohn must battle Ansel’s allies and his family to find the murderer.

SEG: In the first book, Teddy Lawless tells us that she ran away from finishing school. Since she went from being a debutante to a nurse in the Army before she met Cornelia, I knew there had to be a good story there.

SEG: We like to take the reader into the time and place of our stories. We try to recreate the feel of the location and the times, but we also touch on the good and bad aspects of that time. Florida was a land of great opportunity, but not for everyone. There were also winners and losers in each venture.

SEG: Cornelia and Teddy were inspired by Sarah’s great-great-aunt, who served as an Army nurse during the Great War (as WWI was known at the time). She served in France and was injured by poison gas. After she returned to the States, she travelled widely and hosted events in support of the veterans. Cornelia inherited her stubborn personality and a love of birdwatching. Teddy inherited the injury and social acumen, although she has put the latter to uses Aunt Dess would not have approved of.

Professor Pettijohn, engineer and inventor, was created by Gwen in her Nessa Donnelly series, and I fell in love with him. I poached the character for the Snowbirds series because he’s that much fun. 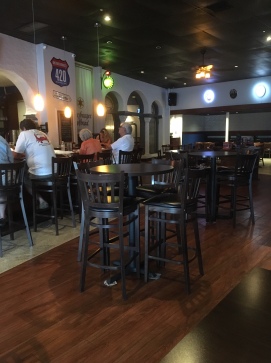 SEG: We visit the places we write about. Gwen and I have been to the Vinoy Hotel many times, we found what remained of The Gangplank (Saint Petersburg’s first nightclub), and we even drove to Sarasota to see the locations of Professor Pettijohn’s search for a witness. Gwen brings the sensory qualities and gritty details to our story, while I’ll tell you what was playing at the speakeasy, what people were eating, and explore the local attractions.

SEG: Gwen and I each bring our talents to the table. She steeps herself in books and historical photo collections for the locations, social history, and people, while I use Newspapers.com, various music sites, and old advertisements to give me a feel for what our heroes see and hear during their travels. I keep a calendar for the plotline and pair it with the information I gather. For example, our snowbirds compete for space with a throng of visitors from Maine because the governor and his entourage visited Saint Petersburg the same week our trio arrived. Why not play with it?

SEG: This book can be read as a standalone, but the first book in the series is Murder on the Mullet Express. The title was inspired by a real train that ran between Ocala and Homosassa for several decades.

Unlike the ‘big city’ setting of the Saint Petersburg novel, the setting is rural. The West Coast Development Company plans to build an ideal community in Homosassa, and Professor Pettijohn tells his niece Cornelia that he wants a warm winter home. He’s lying. Before the book is over, the local sheriff and mobsters from Tampa both take an unhealthy interest in him.

We’re currently working on book three, Ybor City Blues. It reintroduces us to some of the characters from the first novel, and our characters meet Charlie Wall, Tampa’s “Dean of the Underworld.” I hope this will whet your appetite!

Thank you for hosting me!

You’re welcome, Sarah. Thanks for answering my questions, and good luck with Murder at the Million Dollar Pier, the latest book in the Three Snowbirds Mystery series.

Readers can learn more about Sarah and Gwen, and their writing by visiting their Sarah’s and Gwen’s websites. You can also follow Sarah on Twitter.

The novel is available at the following online retailers

About Sarah E. Glenn: Sarah loves mystery and horror stories, often with a sidecar of humor. Several have appeared in mystery and paranormal anthologies, including G.W. Thomas’ Ghostbreakers series, Futures Mysterious Anthology Magazine, and Fish Tales: The Guppy Anthology. She belongs to Sisters in Crime, SinC Guppies, and the Short Mystery Fiction Society.

Her great-great aunt served as a nurse in WWI, and was injured by poison gas during the fighting. After being mustered out, she traveled widely. A hundred years later, ‘Aunt Dess’ would inspire Sarah to write stories she would likely not have approved of.