Welcome, Sophie. Let’s get started, shall we?

I’m Sophie Kimball, a forty-something bookkeeper/accountant, but everyone calls me Phee. I never intended to become an amateur sleuth but what can you expect when you work for an investigative agency in Glendale, Arizona? Most of the time I find myself in my mother’s retirement community of Sun City West, Arizona, tracking down clues for unsolved murders. In DRESSED UP 4 MURDER, my mother’s dog, Streetman, a neurotic little Chiweenie, finds a dead body under the tarp that covered her neighbor’s grill. Needless to say, barbequing is now on hold until the murderer can be caught.

This is the sixth novel in the Sophie Kimball Mysteries, Kensington Publishing, and like the others, is meant to keep readers laughing and guessing whodunit. It has a cadre of wacky characters, namely my mother’s book club and her neighbor Herb’s pinochle crew. Not to mention my aunt Ina, who’s as free-spirited as they get.

Does the writer control what happens in the story or do you get a say too?

Usually it’s the team of writers who get the say – Ann I. Goldfarb and James E. Clapp, writing as J.C. Eaton. However, there are times when things happen that neither author expected and I have to give myself credit for being the one who twisted their arms.

How did you evolve as the main character?

I began as a reluctant sleuth but as the series progressed, I took more risks and became more emboldened. Although I acquiesced to my mother and my aunt in the beginning of series, I became a force to be reckoned with as I solved more and more murders.

Do you have any other characters you like sharing the story with? If so, why are you partial to them?

I love sharing the story with my mother and the book club ladies. Their antics are over the top and their reflections about life and people in a senior community are priceless.

What’s the place like where you find yourself in this story?

It’s a senior community twenty miles northwest of Phoenix, Arizona. Lots of sun, a zillion activities, numerous restaurants, and quirky clubs. In fact, each book in the series showcases a different club. In MOLDED 4 MURDER, the clay and ceramic clubs were featured as the victim was found smothered to death with a clay jar over his head. Yikes.

Is there anything else you’d like to tell readers about you and the book?

If readers enjoy colorful antics and a good dose of hyperbole, this will be a fun read. It’s not to be taken seriously but is meant to make readers laugh out loud and forget about their own troubles while solving a murder mystery.

Thanks for answering my questions, Sophie, and good luck to you and your authors with Dressed Up 4 Murder, the latest book in the Sophie Kimball Mystery series.

Readers can learn more about Sophie and her authors by visiting her author’s websites:

Ann I. Goldfarb: New York native Ann I. Goldfarb spent most of her life in education, first as a classroom teacher and later as a middle school principal and professional staff developer. Writing as J. C. Eaton, along with her husband, James Clapp, they have 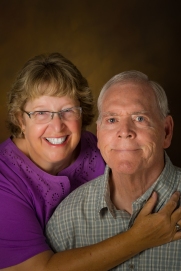 James E. Clapp: When James E. Clapp retired as the tasting room manager for a large upstate New York winery, he never imagined he’d be co-authoring cozy mysteries with his wife, Ann I. Goldfarb.  Non-fiction in the form of informational brochures and workshop materials treating the winery industry were his forte along with an extensive background and experience in construction that started with his service in the U.S. Navy and included vocational school classroom teaching.