Enjoy some magick and mystery

Today Sharon Pape is visiting Ascroft, eh? to tell us about This Magick Marmot, her latest novel in the Abracadabra mystery series.

Welcome, Sharon. Let’s get started, shall we?

This Magick Marmot is the fifth and final book in the Abracadabra Mystery series. The stories focus on Kailyn Wilde, a sorcerer descended from an ancient English line. Her ancestors   came here in the seventeenth century and settled in what is now Upstate New York. Over time, the quaint tourist town of New Camel grew up around their shop. When murder finds its way to her town, Kailyn sets out to find the killer. After all, murder is never good for business.

Each of the five books has a standalone murder mystery, as well as other mystery threads that run through the series and are resolved over its course.

The story in This Magick Marmot concerns two deaths, the first, ten years earlier on the night of Kailyn’s high school prom, was labeled accidental, the second, at her high school reunion, is a clear case of poisoning. 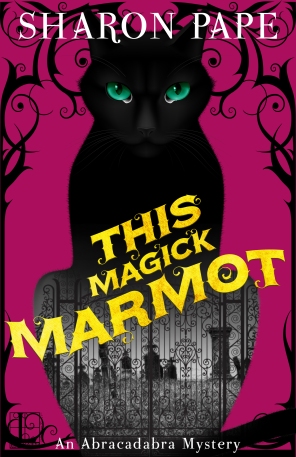 I’m not sure exactly what gave me the idea for the murder in This Magick Marmot, but I can let you in on my thoughts at the time. Some of the plots in the earlier books in the series had a wider focus, and I wanted to narrow that focus down again in this last book. I needed a plot that would impact Kailyn in a deeply personal way. Given these parameters, my brain churned out the idea of a murder at her high school reunion that leads to a new look into another death ten years earlier.

I wanted to try my hand at a cozy with a magical theme, but since there are already quite a few, I was determined to make mine different. My main character needed credentials that set her apart from the more ordinary witches out there. I gave her a magickal heritage that spans centuries and was passed down genetically from a famous character in literature and folklore. In keeping with this idea, I created the characters in her family – the ghosts of her mother and grandmother, and her only living relative, Aunt Tilly. Tilly, who has her own magickal powers, is a perfect foil for Kailyn and the more serious nature of the murder cases. The arrival of a relative from the past adds to the magick and mayhem throughout the series. I love all my characters, but most of all the ones who add the humor like Aunt Tilly.

Details bring a place to life – descriptions that involve the five senses allow readers to imagine they are right there with the characters. And three dimensional characters also bring a place to life. I prefer to write about places I’ve been. The town I create may be a product of my imagination, but the settings are always real.

I love doing research for my books. I wrote three books back in the dark ages before computers and the internet. Doing research at that time was more of a challenge than it is today. I spent a lot of time at the library, which wasn’t a hardship since I’ve always loved libraries. Now I do most of my research on the internet – I’m always amazed at what I can find there. If the police ever have cause to look into my “google” searches I’m done for.

This Magick Marmot is the final book in the Abracadabra series. I think readers will be satisfied with the way it ends. I’m always a little sad at the end of a series – after all I’ve been living with the characters for several years. But then I turn my thoughts to my next series and the new characters who have been waiting impatiently in the wings, to “strut and fret their hour upon the stage,” in the elegant words of William Shakespeare.

Thanks for answering my questions, Sharon, and good luck with This Magick Marmot, the latest book in the Abracadabra Mystery series.

About Sharon Pape: Sharon describes her writing career as having two stages. Back in the dark ages, before computers were in every household, she had three paranormal books published. The first one was condensed by Redbook Magazine, the first paperback original they had ever condensed. Around the same time, Redbook published her first short story.

Then life brought her an unexpected challenge that went by the name of breast cancer. When her treatment was over, she became a volunteer for the American Cancer Society’s Reach to Recovery Program and went on to be the program’s coordinator for Nassau and Suffolk Counties on Long Island. Several years later, with the help of her surgical oncologist and two other survivors, she started her own not-for-profit organization to provide information and peer support to newly diagnosed breast cancer patients. Once the organization was running smoothly and didn’t require as much of her time, she returned to her first love – writing. During this second stage of her career, she’s been writing cozy mysteries with a paranormal twist and a splash of humor.