May I introduce Lady Rosamund?

Today Lady Rosamund Phipps from Lady Rosamund and the Poison Pen is visiting Ascroft, eh? to tell us about the novel, the latest novel in the Rosie and MacBrae mystery series by Barbara Monajem.

Welcome, Lady Rosamund. Let’s get started, shall we?

Lady Rosamund and the Poison Pen is the first in a series of Regency mysteries. I am Lady Rosamund Phipps, and in this novel I am plagued by both a caricaturist and a poison pen. My sanity (I don’t use that word lightly) and my life are at stake!

I don’t know what will happen in the rest of the series – I cannot see the future – but the author says it will involve Mr. Gilroy McBrae as well as me. I’m not certain how I feel about this.

Does the writer control what happens in the story or do you get a say too? 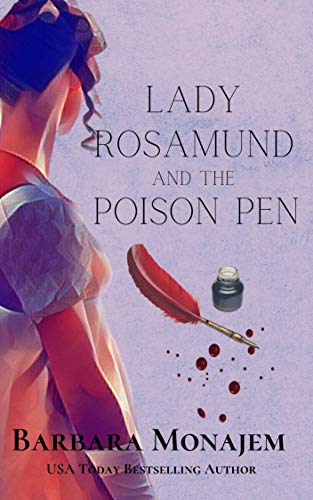 The poor, beleaguered writer is obliged to see, do, think, react, and comment precisely as I would! Sometimes my views seem frightfully archaic to her, but she steels herself and writes what I want her to. However, she seems determined to encourage my friendship, such as it is, with Mr. McBrae, and he is impossible to control.

How did you evolve as the main character?

I didn’t evolve. I’m the daughter of an earl, the granddaughter of a marquis, and the cousin of a duke. I am by my very existence a main character!

Do you have any other characters you like sharing the story with? If so, why are you partial to them?

I’m partial to my friend Cynthia. She’s my bosom friend, and very worldly – which I am not. She explained some of the more risqué aspects of the caricatures to me. I dearly love my father (although he doesn’t really come into the first story). Surprisingly, I’m a little bit partial to Gilroy McBrae. This is quite odd and not entirely acceptable – he’s significantly below me socially, and in my mother’s words, a nobody. (Not that my mother’s opinion is likely to sway me. I would much rather NOT share the story with her.)

What’s the place like where you find yourself in this story?

London in 1811! It’s cool, damp and dirty, but there’s plenty to do and amusing people to see. And it’s not Kent, where I grew up. Not that I dislike Kent itself, but my mother lives there, so I stay away.

Is there anything else you’d like to tell readers about you and the book?

Corvus, the obnoxious caricaturist, thinks HE should be the subject of this interview. How dare he? Not only that, how dare he mock me in his caricatures? Not that I dislike them, exactly. They’re skillful drawings, and he portrays me as much prettier than I am in real life. And some of them are quite, quite hilarious.

But others are not. Again, how dare he? There are no bounds to his effrontery!

Thanks for answering my questions, Lady Rosamund, and good luck to you and your author with Lady Rosamund and the Poison Pen, the latest book in the Rosie and McBrae Mystery series.

The novel is available online at  Amazon 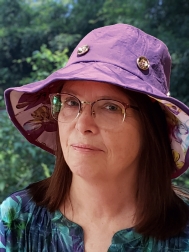 About Barbara Monajem: Winner of the Holt Medallion, Maggie, Daphne du Maurier, Reviewer’s Choice and Epic awards, Barbara Monajem wrote her first story at eight years old about apple tree gnomes. She published a middle-grade fantasy when her children were young. When they grew up, she turned to writing for adults, first the Bayou Gavotte paranormal mysteries and then Regency romances with intrepid heroines and long-suffering heroes (or vice versa). Some of her Regencies have magic in them and some don’t (except for the magic of love, which is in every story she writes).

Barbara loves to cook, especially soups, and is an avid reader. There are only two items on her bucket list: to make asparagus pudding and succeed at knitting socks. She’ll manage the first but doubts she’ll ever accomplish the second. This is not a bid for immortality but merely the dismal truth. She lives near Atlanta, Georgia with an ever-shifting population of relatives, friends, and feline strays.

I'm a Canadian writer and author, living in Britain. My first novel, 'Hitler and Mars Bars' was released in March 2008. More information abo
View all posts by Dianne Ascroft →
This entry was posted in Archives, June 2020, Uncategorized and tagged Barbara Monajem, cozy mystery, Lady Rosamund and the Poison Pen, mystery, Rosie and McBrae. Bookmark the permalink.

4 Responses to May I introduce Lady Rosamund?