Peer Into ‘Keeping The Wolves At Bay’

Bernstein’s professional background undoubtedly qualifies him to provide this training. President of Bernstein Crisis Management, Inc., he has varied professional experiences, including public relations, crisis management, journalism, and covert military intelligence operations. He is a regular guest commentator and expert source for national media outlets and PR Week described him as one of 22 individuals nationwide in America “who should be on the speed dial in a crisis”.

Here’s the excerpt he’s chosen from Keeping The Wolves At Bay: Media Training: 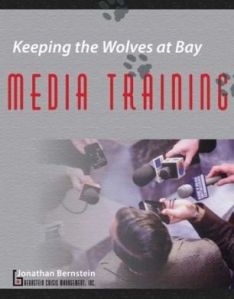 “Believe it or not, reporters would probably find it as scary to be in your mind as you would to be in theirs.  The catch is that they’re paid to be in yours and will do their best to get there.

Reporters may, in fact, come into interviews with a bias – personal, based on their own experiences and belief system, or “employer-based,” reflecting their media outlet’s political leanings, attitude towards certain types of organizations, etc. However, with rare exception, they are not usually out to “get you.”  They’re merely doing their job and trying to receive as much recognition for it as possible.  Just like you, right?

A reporter wants a story that’s newsworthy, that appeals to his/her editor and audience.  There is a journalistic code of ethics at www.spj.org/ethicscode.asp, but it allows for behaviors you may or may not deem acceptable while in pursuit of a story.  And journalists probably don’t review that code very often.

Your job is to tell your side of the story.  You are in conversation; you have to know to whom you’re speaking.  The reporter is asking you questions he/she thinks the audience will want answered.  That means you must speak through him/her to your stakeholders, giving them what you want them to know in terms that will be meaningful to them.

By employing the information in this manual, you will improve your ability to balance a story – but remember that “balanced” does not equate to “the story came out the way it would have come out if you had written it.”  It means you got a fair shake, even if people who completely disagreed with you also were treated fairly. By definition, a totally balanced article is still only 50% “your side” of the story.  And true balance is as rare as honest politicians.

You may find this surprising coming from the author of a media training manual, but as a crisis management professional  I advise clients that the traditional media is not your most important stakeholder group, because it is the least reliable means of accurately communicating information. However, media outlets are an important stakeholder group and one gateway to those who matter most to you – typically your employees, customers, investors, community leaders, the general public, etc.  In some specific situations, such as natural disasters, the traditional media can be a particularly important method of getting your messages out.  And it’s true that whether you cooperate or not, reporters will write their stories – so why not do your best to optimize the results?”

The publisher describes the book as “an accessible, enjoyable book for anyone who may have to deal with the media, whether face-to-face, by phone, or online. Keeping the Wolves at Bay: Media Training brings readers the best of Bernstein’s nearly three decades of crisis management and media training experience, written in a style that’s both entertaining and informative.”

They invite you to join them on Jonathan Bernstein’s virtual tour this summer – for much more information about the tour, the author and the book, visit – http://bookpromotionservices.com/2010/04/28/keeping-wolves-bay-tour/.

I'm a Canadian writer and author, living in Britain. My first novel, 'Hitler and Mars Bars' was released in March 2008. More information abo
View all posts by Dianne Ascroft →
This entry was posted in June 2010 and tagged author tours, business, Jonathan Bernstein, Keeping The Wolves At Bay, public relations. Bookmark the permalink.

2 Responses to Peer Into ‘Keeping The Wolves At Bay’