Trade Winds Carried Me Along 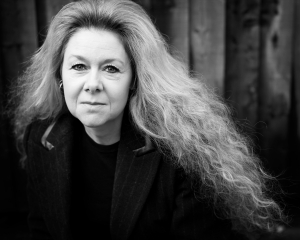 When I first met Christina Courtenay at the Historical Novel Society’s UK conference last October, she was excited that her first novel, Trade Winds, had just been released. Her description of it prompted me to order a copy and I added it to my reading pile. It’s been a busy few months for Christina and in March she released her second novel, The Scarlet Kimono; the same month I invited her to Ascroft, eh? to chat about this latest novel. Meanwhile I was working my way through my reading pile to Trade Winds.

Well, I finally began reading Trade Winds this spring (I need more hours in each day to enjoy all the books I want to read!). Trade Winds falls into the historical romance genre. I have to admit this isn’t a genre I read regularly so I didn’t know what to expect. So I was pleased to find myself quickly lost in the book. It’s a great story filled with engaging characters. Its settings, Sweden, China and Scotland, were a mix of new and familiar for me. I lived in Scotland for several years and I’ve always had an interest in the country (Scottish history books have always been on my reading list) so I welcomed the Scottish scenes and characters. Knowing little about Sweden and China, and nothing about these countries during the 18th century, I was intrigued to read about them. Christina brought to life the era, the places and the people. The story flowed at an exciting pace through the three countries and I was swept along. So, since I enjoyed this novel, I’m adding The Scarlet Kimono to my reading pile.

Meanwhile, I’ve invited Christina to chat about Trade Winds. Welcome, Christina! Shall we get started?

Tell us about Trade Winds. 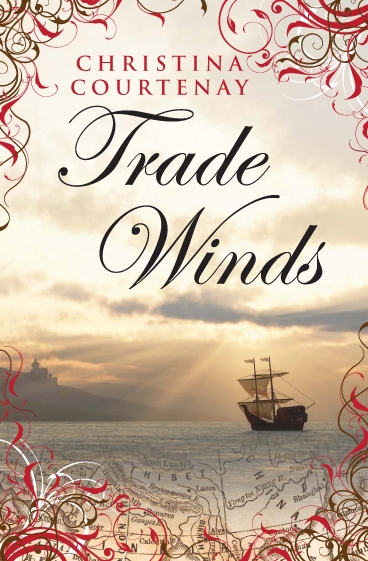 CC: Trade Winds is the story of Killian Kinross, a handsome Scotsman who goes to Gothenburg inSweden to try and make his fortune.  There he meets Jessamijn van Sandt, who believes she’s being swindled out of her inheritance by her step-father, and is determined to stop it.  Jess and Killian join forces in a marriage of convenience, but when Killian is offered the chance of a lifetime with the Swedish East India Company (SOIC), he can’t refuse.  He sets sail on a daring voyage toCanton inChina, but the journey doesn’t quite work out the way he expects it to …

What sparked your interest in the founding of the East India company and made you decide to use it as the backdrop to your story.

CC: I did learn about it at school when I was about 12 (history lessons), but had mostly forgotten, even though it interested me a lot at the time.  Then in the spring of 2007, the sailing ship Götheborg docked atLondon’sCanaryWharf for a couple of weeks.  It’s an exact replica of a ship used by the SOIC to sail toChina and members of the public were allowed on board to explore.  I was fascinated all over again and the story started to evolve in my mind.  Because of my own “international” background (being half Swedish/half English, but having lived inJapan for a while), I loved the fact that I could combine all these elements in my novel too.

As I’ve mentioned, I’m quite interested in Scotland. So I have to ask – why did you choose Scotland as the setting for part of the story?  And also, why a Scottish hero?

CC: When I did some research about the SOIC, I found that because the Swedes didn’t have much experience of trading in theFar East, they had to employ Scotsmen and Englishmen to help them at first.  Since I’ve always lovedScotland, this seemed perfect for my story and having a Scottish hero helped me to showSwedenthrough the eyes of a foreigner.  Anyway, there’s something very special about Scottish heroes, wouldn’t you agree? 😀  (I certainly can’t disagree with you on that, Christina!)

What research did you do to write this story? 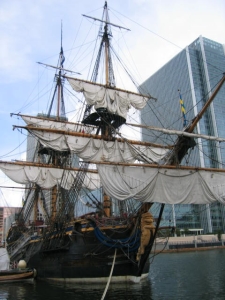 CC: As I said, I went on board the ship Götheborg, then read lots of books about the SOIC.  I also had to brush up on Swedish history for that period (my knowledge was bit rusty) and then I went to Gothenburg to have a look at the town and its layout.  At theCityMuseum there they keep all the old records of SOIC employees and some artefacts from theChina trade, so I spent some time there reading old diaries and things like that.  Finally, I went toEdinburgh to get a feel for that city as well.  Sadly, I wasn’t able to go toChina, but had to use other people’s descriptions for that.

Do you find it difficult to set stories in time periods when women had little power or control over their lives?

CC: No, I like the challenge!  My heroines usually try to push the boundaries, or resent having men control everything and rebel, but since they’re intelligent, they can often get round this in other ways.

This was your first published novel.  Was it the first one that you wrote?

CC: No, it was about the tenth or eleventh (have lost count)!  My very first one was eventually published as a novella though (after a severe pruning), so it wasn’t a waste of time.  And I see the others as a learning curve – someone told me authors have to serve a sort of “apprenticeship” just like solicitors and the more books we write, the better they get hopefully.

Thanks for taking time to answer my questions, Christina. I enjoyed Trade Winds so I’m delighted that you dropped by to tell us a bit more about the novel and how you approached writing about the era it’s set in. Good luck with both novels, Christina!

To learn more about Christina and her novels, visit her website: http://christinacourtenay.com/