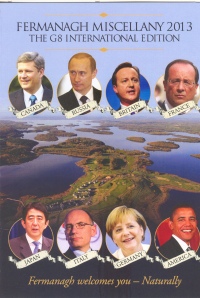 Soon after it was announced that this year’s G8 meeting would be held in County Fermanagh John Cunningham, as chairman, proposed to Fermanagh Authors’ Association that we should devote this year’s Fermanagh Miscellany to the momentous event. Everyone agreed and we frantically set to work. In half our normal time we produced a book that is one third larger than usual – and it’s not padded with ads!

As we have for several years John Cunningham and I co-edited the book. Once again I learned lots of interesting facts about Fermanagh places and people in my role as editor. And I also got a chance to delve into the connections Fermanagh has with my home country, Canada – including several villages that bear the name Enniskillen – and write about what I learned. So writing for and editing this year’s Fermanagh Miscellany has been fun and I enjoyed the launch this afternoon.

If you are interested you can read more about the book and its launch here.