A Good Choice For Romance Readers 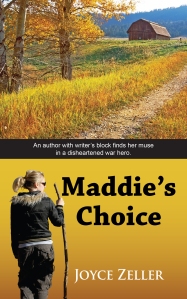 addie’s Choice by Joyce Zeller to review as part of the author’s current blog tour.

The novel’s Amazon blurb says: “Romance writer Maddie Taylor is fed up with New York City. She is getting nowhere with her latest manuscript and does not believe true love exists outside of her imagination. When a friend, Jonah Spartman, dies and wills her half of his Arkansas cattle ranch, she sees the chance for a new beginning. Jonah has also left behind two orphaned great-grandsons desperate for affection and an accounting book in the red. The other half of the failing ranch belongs to Gideon Spartman, Jonah’s grandson, who believes all capacity for love was torn from him during his tour of duty in Afghanistan. Rugged and sexy, Gideon is the enthralling physical manifestation of the hero in Maddie’s current manuscript. He is far from happy to be sharing an inheritance that is rightfully his. As she senses the need behind Gideon’s rough and unwelcoming exterior, Maddie acknowledges her own yearning for love and family. Jonah’s will requires Maddie to stay on the ranch for three months. When that time is up, will she return to her comfortable but emotionally barren existence or embrace the challenges of her new life, which include cattle rustlers and drug dealers? Maddie’s choice proves to be far from simple.”

I found this novel an entertaining read. It falls very firmly into the romance genre and conforms to the expectations for the genre. There’s no doubt that the developing romance between Maddie and Gideon is its driving force and it was satisfying to know I would find a happy ending when I reached the last page.

The one element of the novel that particularly caught my attention was the characters. Creating characters that readers care about is Zeller’s forte. Maddie is believable. She’s feisty yet not invincible and readers empathise with her insecurities and emotional vulnerability. At first I found Gideon emotionally remote and rather two dimensional but as the story develops and he grapples with his post-traumatic stress disorder, his emotional armour cracks and he becomes more three dimensional. Many of the minor characters also made an impression on me during the short periods they appear in the story: they were unique and memorable. The only character who jarred with me was Matt, one of Jonah’s orphaned great-grandsons. His impulsive comments are the catalyst that triggers several important events in the plot but, even considering his emotional neediness, he did not seem true to a boy of his age. He seemed younger than his physical age.

The plot moves along at a fast pace and there’s a lot thrown into it: from cattle stealing and drug dealing in Arkansas to tackling post-traumatic stress disorder and writer’s block. A few titillating but tasteful sex scenes added to the mix.

I found the quick pace of the book satisfying until the last few pages. There is a sense of urgency and a lot of action in the final scene but I felt that it needed to be expanded to do justice to the conclusion. The bad guys were dealt with and dispatched a bit faster than I believed possible and Gideon suddenly overcame his PTSD in order to rescue Maddie from the villains. In earlier scenes we learned that Gideon is severely afflicted by the disorder so I wasn’t convinced that he could overcome it so easily, even for Maddie. The final scene was told completely from Maddie’s perspective. I think it might be improved if Gideon’s viewpoint were included so that readers would understand how he managed to conquer his mental torment and rise to the occasion.

The setting grabbed my attention almost as much as the characters did. Maddie’s New York and the Spartman ranch are both well drawn. When Maddie arrived in Arkansas I felt like I was there: the new places and people she encountered reminded me of towns and rural areas I’ve visited in America and Canada. Zeller has a flare for creating a very real setting and she convincingly portrays the life of a working ranch.

Maddie’s Choice is a fast read, written in a simple, direct style. Readers who enjoy action packed romances will enjoy this story.

Readers can learn more about the novel on its Goodreads page and can follow its blog tour.

About Joyce Zeller: She has written articles for a magazine and a cooking column for a chain of suburban newspapers north of Chicago. She has written five books and published two, The Hidden History of Eureka Springs, and Accidental Alien, a work of science fiction, both available on Amazon. Her short story, “Love is a Seed,” is featured in Embrace: A Romance Collection, (2012 Goldmine Press). You can find Joyce on the Web at http://www.joycezeller.blogpot.com.

2 Responses to A Good Choice For Romance Readers