On Monday Fermanagh Authors’ Association launched the ninth book in our Fermanagh Miscellany series. After a couple themed 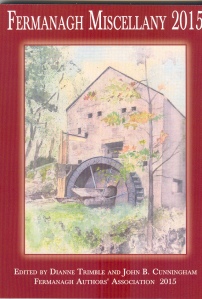 books in the series (2013 was our G8 edition and 2014 focussed on events during the Decade of Commemorations), Fermanagh Miscellany 2015 returns to what the group does best: exploring the history of the county.

The supernatural seems to intrigue me lately. I’m currently working on novel set in World War II that revolves around a ghost story and my contribution this year to the anthology is a short story entitled Our Last Hope which fictionalises the legend of the Coonian ghost. It wasn’t the influence of Halloween, honestly.