An Encounter That Will Linger In My Mind

Last week I finished reading Past Encounters by Davina Blake. The novel came to my attention when I received a free copy of the book in exchange for an honest review. It is an historical fiction that hops between the closing years of the Second World War and a decade later. I thoroughly enjoyed the story and found it easy to immerse myself in it. 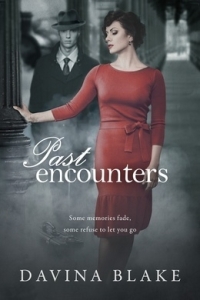 The day Rhoda Middleton opens a letter from another woman, she becomes convinced her husband, Peter, is having an affair. But when Rhoda tracks the mysterious woman down, she discovers she is not Peter’s lover after all, but the wife of his best friend, Archie Foster. There is only one problem – Rhoda has never even heard of Archie Foster.

Devastated by this betrayal of trust, Rhoda tries to find out why Peter has kept this friendship a secret for so long. Her search leads her back to 1945, but as she gradually uncovers Peter’s wartime experiences she must wrestle with painful memories of her own. For Rhoda too cannot escape the ghosts of the past.

Taking us on a journey from the atmospheric filming of Brief Encounter, to the extraordinary Great March of prisoners of war through snow-bound Germany, Past Encounters explores themes of friendship, hope, and how in the end, it is the small things that enable love to survive.”

The novel is well written. Organised into chapters that are told from the viewpoints of three characters, it is arranged to build suspense and keep the reader delving into the characters’ pasts to discover why their lives have turned out as they did. I found the use of the viewpoints of the three main characters, Rhoda, Peter and Helen a very skilful, effective device to tell the story. From Rhoda’s and Peter’s perspectives we build up a balanced picture of a marriage that is struggling. Helen’s viewpoint, as the potential other woman, is added late in the story to provide needed extra details and clues to the events unfolding. At first I wasn’t keen to have another viewpoint added so late in the story. I thought it would be intrusive but I soon warmed to Helen and wanted to understand how she viewed her relationships with each of the Middletons.

I found the main characters realistic and engaging. As the story progresses we see them change and mature in ways the reader will applaud. A couple of the minor characters, Archie and Matthew, also stand out as they quietly capture the reader’s heart. Matthew is optimistic and sensitive despite his battle with ill health. Archie’s journey to maturity in the harsh environment of the prison camp is a noteworthy thread of the story. Despite their flaws the reader roots for these characters.

The novel juxtaposes a captured soldier’s struggle to survive in a grim prison camp with the tender love story on home soil between Rhoda and Matthew. There are gut wrenching scenes in the prisoner of war camps and on the Great March across Germany that are emotionally gripping and very disturbing as well as gentle, romantic scenes between Rhoda and Matthew that lull the reader to forget the gruesomeness of war. The author has great skill in depicting a range of life experiences, from the mundane routine of home to the horrors of life in a theatre of war. She also cleverly sets one thread of the story around the filming of the Second World War film, Brief Encounter, adding an interesting historical detail to the novel.

Past Encounters is a story of love, betrayal, guilt and forgiveness in threads that seamlessly weave the lives of four individuals together. Nothing is as simple or straightforward as it seems and the author skilfully unveils the lives of each of the characters so that the reader feels empathy with them and understands how their lives have taken the paths that they have. It is a complex and engrossing story and I would heartily recommend it to both historical fiction and general fiction fans. It is a very good read.

For more information about Davina Blake visit her website and blog. You can also find her on Twitter. Past Encounters is available on Amazon US & UK as well as through other retailers.

About Davina Blake: She used to be a set and costume designer for theatre and TV, during which time she developed a love of research which fueled her passion for the past. She holds an MA in Creative Writing from Lancaster University and also writes successful seventeenth century historicals under the pen name Deborah Swift. ‘Her characters are so real that they linger in the mind long after the book is back on the shelf. Highly recommended.’ The Historical Novels Review From Davina: ‘I was inspired to write ‘Past Encounters’ because I live close to the railway station where the iconic ‘Brief Encounter’ was filmed in 1945. I have often used the refreshment room that featured in the film when waiting for a train. I love a good cup of tea, preferably accompanied by a chocolate brownie!’