As I promised, Karina Fabian, author of Magic, Mensa and Mayhem, is joining us today to talk about writing funny fantasy.

Although a Mensan, Karina Fabian lives a life of “F’s” — Family, 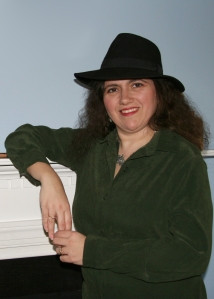 Faith, Fiction & Fun. Winner of an EPPIE award for best sci-fi (Infinite Space, Infinite God) and a Mensa Owl for best fiction (“World Gathering: Magic, Mensa and Mayhem”), Karina’s writing takes quirky twists that amuse her — and her readers. A fan of comedy improv, she came up with Dragon Eye, PI, started after watching a film noir skit on Whose Line Is It, Anyway? and it has grown into one of her favorite worlds to write in. Karina lives with her husband and children at Minot AFB, North Dakota.

…and falls into the pool of banana cream at the end.

It sounds easy, but just like trying to juggle Beanie Babies and banana cream pies while traversing a wire on a unicycle, the execution is hard. I’d like to share with you some of the things I’ve learned while writing my humorous fantasy mystery, Magic, Mensa and Mayhem: From the Case Files of DragonEye, PI.

Keep your character unbalanced in a comical way and toss absurd situations at him as he reaches his goal–then toss in the big surprise. In Magic, Mensa and Mayhem, my dragon detective Vern and his partner Sister Grace, are hired (unpaid) to chaperone a bunch of magical creatures at a Mensa convention in Florida. It should be a cushy job, but pixies start pranking, Valkyrie start vamping, the dwarf runs of to “get discovered,” and the Elves get high on soda and declare war. From the beginning, Vern and Grace are off-balance with magical who have their own agendas (that have nothing to do with the conference agenda), Magicals that show up on their own (like Coyote the Trickster on parole from Montana for the conference), and (the banana cream tub) the elves involving Florida in their intertribal spat.

Find a combination of plot, person and world that naturally moves to humor. It was never my intention to write humor, but my DragonEye, PI world offered some ripe opportunities. With a cynical dragon detective who was undersized and underpowered thanks to a spell by the Faerie St. George and a world of legends and myths to twist however I wanted, I had the circus, the performer and the ingredients for banana cream. Even so, not all my DragonEye, PI stories are funny (though most have some amusing aspects). If the combination is not right, I don’t force the joke.

Find your kind of humor. Some folks like slapstick and pun. Others prefer the dry chuckle. Some don’t mind the occasional potty joke for a laugh. Use the humor you are comfortable with–and that your story will support. Here are some ideas:

Puns. Highest form of language or lowest form of humor, some people love them. I love them, so my dragon Vern does, too, so they get used liberally in my DragonEye stories.

Puns get even more clever if they are integral to the story rather than just tossed in. For example, I decided to play off Shakespeare’s Midsummer Night’s Dream by calling a master practical joker, “Puck,” just because there are so many puns off “puck.” Pixies were pranking all over the convention–passing the puck, you could say–which not only gave Vern headaches but me plenty of opportunity for jokes.

Look at a situation from the outside. Being an androgynous dragon gives Vern a unique perspective on human activities like courtship. It also made for some embarrassing situations for him, like when he has to counsel Brunhilde against promiscuousness.

Twist a cliché: Brownies supposedly clean your house and do your work–what if they did stuff you didn’t want them to do? Re-arrange your CDs, finish your crosswords?

Exaggerate:  A longstanding humor tradition. For me, the High Elves were an easy target. Long-lived equals long-winded in my universe, and that makes for some fun situations–from Gozon pontificating, oblivious to Vern’s struggle to get a toddler off his back, to Galinda summing up her marital problems with, “Now all he says is, ‘You look good, babe.’”

Have fun. If you are not enjoying your own story, others won’t either. Don’t force the humor, and don’t worry about the ebb and flow of the funnies. The very best stories aren’t the ones that have a laugh-a-minute, but take time for a serious moment of introspection or poignancy.

Finally, read funny stuff, especially in your genre. As a fan of Terry Pratchett, Robert Asprin and Jody Lyn Nye, and Piers Anthony, I’d already immersed myself in the best of fantasy humorists. Through reading, my mind gradually absorbed the puns, the twists of the normal into the absurd, and the pace between silly and serious. I owe a debt of gratitude to these people, which is why I dedicated my book to them.

Humor, when it works, is fun to write. It’s even more fun to read. May you have as much fun writing your stories as I do writing mine.

If you are intrigued by Karina’s ideas for writing funny fantasy, you’ll enjoy her latest novel, Magic,Mensa and Mayhem.

Publisher’s Weekly, in their review, says:

“Religion and humor suffuse this well-imagined and densely plotted comedic mystery, based on a short story of the same title. Cursed by St. George to serve the Faerie Catholic Church, dragon detective Vern now sleuths in the mundane world. His latest (unpaid) assignment is to babysit a group of faeries attending a Mensa meeting. Vern quickly has his claws full juggling crises, from invisible brownies to two elves whose rivalry threatens to become interdimensional war. Distinctly memorable and occasionally silly supporting characters, from Brunhilde the Valkyrie to Native American trickster Coyote, steer the action. While the conclusion sticks perilously close to genre formula and the narrative is jumpy throughout, most readers will forgive the clichés (and Vern’s groan-worthy puns) and chuckle all the way through.”

Karina is giving readers a chance to win a copy of Magic, Mensa and Mayhem. I’ll let her tell you how to enter:

“I am having a trivia contest for people who have read Magic, Mensa and Mayhem. On April 30, I’ll post 10 questions whose answers can be found in the book.  I’ll accept answers until May 15. The winner gets a free copy of Live and Let Fly, the next DragonEye, PI, novel.  Folks can find the details on www.dragoneyepi.net.”

Hope you enjoyed Karina’s visit today. I’m glad she was able to stop by and let slip a few secrets about how to create the kind of wacky world readers love to get lost in.

Finally, here’s how you can order a copy:

Available from Swimming Kangaroo,  Amazon, Kindle and to order from good bookshops.