The Yanks In Europe

in the Second World War. Almost seventy-five years ago today the first ships carrying American troops docked in Belfast; these troops were the first US troops to arrive in Europe. The first enlisted soldier to officially step onto European soil was Private First Class Millburn Henke of the First Battalion, 133rd Infantry Regiment, 34th Infantry Division. Although other units had already disembarked in Belfast that morning before he came ashore at Dufferin Quay, he was chosen to represent the US servicemen and became the face of the ordinary soldier at the official welcoming ceremony. He was interviewed by reporters and posed for photographs, and the resulting newspaper articles were published across America, making him nationally famous.

Last year I began writing The Yankee Years, a series of Short Reads and novels set in Second World War Northern Ireland. The impact the arrival of the troops, especially the Americans, had on the people of the province inspired the name I chose for the series. Since I’m writing about the era, I was curious about Private Henke and did a little digging. I learned that he came from the small town, Hutchinson, Minnesota where his family ran a cafe and he was twenty-three years old when he enlisted in October, 1941, two months before the attack on Pearl Harbour. Barely three months after he enlisted, in January 1942, he sailed from Brooklyn, New York with his battalion to join the war in Europe.

When they arrived in Northern Ireland, Henke’s unit was sent to 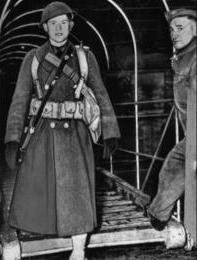 Camp Bellarena, near Coleraine and he spent nine months in Northern Ireland and England before the 34th Division embarked for North Africa as part of Operation Torch. He spent the next few months fighting in Tunisia and received the Silver Star for his bravery rescuing a wounded officer under fire. While the Division was preparing to land in Italy he was involved in an accident: a weapons carrier rolled over and his back was broken. This ended his active service. He then spent several months in military hospitals in North Africa before being shipped back to America where he spent the remainder of the war.

Once he arrived home he married his girlfriend, Iola Christensen, who had been waiting for him in Hutchinson. After the war, he returned to work in his family’s business and he and his wife lived in Hutchinson until his death in 1998, a few months short of his eightieth birthday.

Throughout his life Henke felt that those in his unit who had died serving in the war deserved more recognition than they received and he downplayed his fame. But he was proud to have served his country and every year he took part in the Veteran’s Day ceremony in Hutchinson.

3 Responses to The Yanks In Europe