I love the buzz and glitter of Christmas: strings of coloured lights winking on the Christmas tree in ever-changing patterns; ornaments and tinsel in every imaginable, shiny colour; real or imitation pine wreaths, garlands and trees adorned with baubles; and the plethora of novelty items that serenade listeners with Christmas songs and carols.

all of this. For the past couple of years, I’ve been writing a series of stories set during the Second World War in County Fermanagh – for those of you not familiar with it, it’s a county at the western edge of Northern Ireland bordering the Republic of Ireland. Most people in the western world are aware that the United Kingdom faced hardships during the Second World War, making their holiday celebrations frugal and treats rare and cherished. Conditions varied from place to place, and heavily bombed towns and cities fared worse than others.

Northern Ireland was more fortunate than many other places and its celebrations continued much as they had before the war, with less disruption than other places experienced. In County Fermanagh there had always been some differences in the way Christmas was celebrated between town and country, and between Protestant and Roman Catholic homes, but overall Christmas was kept in the same way as it always had been in homes throughout the county during the war years.

The modern festive season is much more glitzy than the wartime

one. During the Second World War in County Fermanagh houses were decorated with holly and ivy, paper chains, and candles set in carved-out turnip bases. Children received simple gifts in their stockings on Christmas morning, and walked or rode in a pony and trap to church before returning home for the family dinner. In many homes a bird, usually a goose or a chicken if the larger bird couldn’t be obtained, graced the Christmas dinner table accompanied by available vegetables, including potatoes and turnips. The meat was cooked slowly in a range or a roasting pot hung on a crook over the fire. Ration coupons were saved to buy extra sugar, butter and other items but the coupons might not provide the woman of the house with all she required to bake a Christmas cake and other treats. A healthy black market trade both ways across the border with the neutral Irish Free State supplied the shortfall.

There was a huge influx of Allied troops into Northern Ireland

during the war and many families invited servicemen stationed at the numerous army and RAF camps in the county to share their Christmas dinner. Their hospitality was amply repaid by the soldiers and airmen who brought treats such as tinned fruit or meat, chocolates and other luxuries. The American servicemen were particularly welcome guests as they raided their camps’ bountiful stores to bring choice items not available in the British military camps.

Preparations for the festive season began a few days before Christmas Eve (not before Halloween as is now often the case) and the festivities continued throughout the twelve days of Christmas: from Christmas Day until 6th January or Little Christmas as it is often called. While Christmas was primarily a religious holiday, it was also a time to forget cares and enjoy life with family and friends. 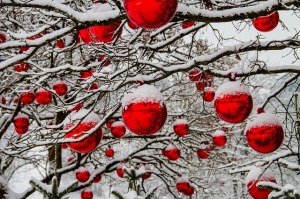 Although they were counterbalanced by the changes the servicemen brought to the county, both materially and socially, privation and hardship were part of the war years. But the adversity they experienced didn’t ruin their Christmas celebrations. The festive season had always been celebrated simply and they continued to enjoy it as they always had. Christmas didn’t lose its lustre during the difficult years of the war.

I recently wrote a blog post for Mary Anne Yarde’s blog about Christmas during the Second World War in Northern Ireland and it caused me to reflect on enjoying simple pleasures during the holidays. Amidst 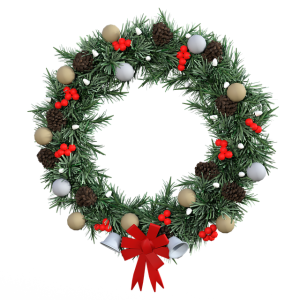 the glitz of the modern festive season, there’s still so many simple things we can enjoy. Have you ever threaded popcorn onto a string to drape across the branches of your tree or made a paper chain to decorate your house? Do you sit in the dark with your favourite drink (with or without alcohol tipped into it) and watch the flames dance in your fire or watch a candle flicker tentatively on the mantelpiece? Have you breathed in the fresh pine scent as you made a Christmas wreath for your front door? Do you savour the smell of logs burning in the fire or the scent of cinnamon wafting from the oven? Have you gazed up at the stars twinkling in the sky then scanned the darkness for lights glowing in the windows of neighbouring houses? Do you stop to listen to buskers and carollers on the street singing carols and Christmas songs? Have you stepped outside after a fresh snowfall and listened to the crunch of the snow underfoot and marvelled at the beauty of the white blanket?

What other simple holiday pleasures do you enjoy? As I said at the beginning of this post, I take a childlike delight in the glitz but I don’t need any of it to enjoy the holiday season as there are so many simple pleasures I enjoy too. Even if you are a fan of the glitz, why not take some time to enjoy the simple things this Christmas too?

Before I return to the fire to curl up with one of the Christmas novels I’m reading, I’d like to wish you, your family and friends a simple, wonderful Christmas! 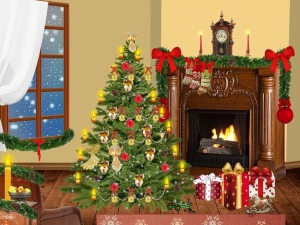 I'm a Canadian writer and author, living in Britain. My first novel, 'Hitler and Mars Bars' was released in March 2008. More information abo
View all posts by Dianne Ascroft →
This entry was posted in December 2017 and tagged Christmas, Christmas celebrations around the world, Dianne Ascroft, Mary Anne Yarde, The Yankee Years, wartime Christmas. Bookmark the permalink.